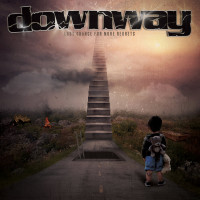 Downway is a band that hits me right in the nostalgia button. I can remember watching them in several community centers in the early 2000’s with bands like Tsunami Bomb, Divit, Belvedere and Deville. For those of us who may remember, Western Canada had a pretty impressive scene for skate punk in the early 2000’s, with bands such as Belvedere, Deville, and you guessed it – Downway, calling Calgary, AB home. The aforementioned bands toured North America and made appearances on the Van’s Warped Tour showcasing their melodic punk rock style played at thrash metal speed with equally impressive guitar licks to match. Despite the success at the time, the scene slowed down and many of the bands within it faded into punk rock obscurity. I was pleased when Belvedere launched their seemingly successful return to the stage a few years ago, and equally so when I heard that Downway would follow suit with their brand new LP Last Chance for More Regrets.

Downway have given us a nice slice of nostalgic punk rock with Last Chance for More Regrets. The music remains fast with soaring melodic choruses that pull the listener in. “Black Taxes” comes out of the gate with a melodic interlude and bright chorus that feels like 2002 all over again. That being said, the nostalgia factor doesn’t come off as a detriment. The band manages to remain fresh over the years with more technical and drawn out interludes thrown in sporadically throughout the record. The band continues to emphasize their dual vocalist approach, which proves to be as successfully executed in 2019 as it was in the year 2000; providing a nice balance between bright and gruff. The production, which was handled by fellow Calgarian Casey Lewis from Belvedere, is crisp and punchy and exactly what a band of this style needs.

Downway have done an admirable job in their return effort following a break of almost 20 years since their last full-length album Defeat Songs in 2001. The band continues to produce fast and catchy punk rock as if no time has passed. I miss the tongue in cheek vibe that is usually found within the genre as Downway prefer to take the more serious route as far as music and lyricism is concerned, but it is far from a major concern.

Last Chance for More Regrets is a sure thing for previous fans and people who may hold this era of punk rock on a nostalgic pedestal (such as myself). Whether current punk rock fans will run with Downway’s return effort remains to be seen, but if observing Belvedere’s return is anything similar, the band have good things to look forward to. If you like fast and melodic punk rock with a 90’s flare, give Downway a shot.