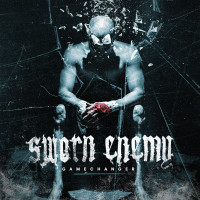 Having long leaned metalcore, on Gamechanger Sworn Enemy appears to be attempting to inch towards a return to their New York Hardcore roots, something not heard since their first EP’s in the early 2000s. The result is a bit of a mixed bag. Gamechanger is no hardcore album, it’s no metal album, and it couldn’t even turn out to be a decent blend of both.

After a rather useless instrumental intro track, “Prepare For Payback” comes off as a straightforward hardcore song. While musically the gears are all operating smoothly, and even exceptionally, it suffers from lyrics that are just simplistic repeated cliches of the typical tough guy hardcore stuff that, frankly, is well beneath this band. It’s also about a minute longer than it needs to be; an eternity for a hardcore song. “Prepare” bleeds right into “Seeds of Hate”. It's a bit of a more polished tune, complete with well executed solos and breakdowns, but it too ends up suffering from being utterly boring and longwinded.

“Coming Undone” could be the strongest track here. After wasting a minute with an uncomfortably out of place acoustic guitar lead-in, it unfolds into a solid, enjoyable song that’s heavy on the riffs. The lyrics are better, the rhythm is on point and circle pit worthy, and the spitting vocal delivery is fast and infuriating (in a good way).

Sadly, that strength is followed with uninspired and flat numbers like “Justify”, “DOA”, “The Fall of Modern Man” and others that all just blend together. Several tracks also feature a spoken word “megaphone” intro, which is one trend from the 2000s that I am fairly certain did not need a resurrection.

Things don’t get interesting again until “The Consequence”, the second to last song of the set. The introspective lyrics mix well with the best drumming on the record, wailing guitar solos, and crunching riffs. The album closes with “Integrity Defines Strength”, a play on the initials of the IDS crew that begot the band. An older tune that hadn’t gotten a studio version until now, it benefits from its classicist hardcore bones as far as structure goes, but the repetitive lyrics haven’t aged quite as well. I’m all for crew pride, but, like many crew anthems, it just doesn’t really speak to outsiders.

Sworn Enemy has been remarkable in the past; underrated hardcore/metal heroes, whose mainstream success potential was hindered by ongoing record label dramatics. Many bands have been able to return from five year (and much longer) absences with new grit, using their foundation to build something better than ever. Unfortunately that is not the case here. Gamechanger, with a small handful of highlights, is an uneven dud.

The Mountain Goats: In League With Dragons