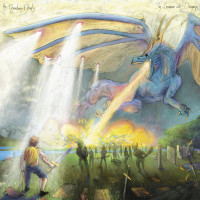 If you’ve spent any time around here, you know the Mountain Goats easily coast into a slot in my list of all-time favorite bands. Every album they’ve put out since I’ve been on staff here has made my year-end lists, and I wrote the reviews for Sunset Tree, Get Lonely,, Transcendental Youth and Beat the Champ. Julie Rivers reviewed the last one, the fantastic Goths, which grabbed my #1 slot on my 2017 list. Needless to say I was excited to learn about a new album in 2019, and when I heard it was inspired by Dungeons & Dragons, I thought about how Beat the Champ was about a topic I wasn’t that interested and it still ruled (and got me interested in regional wrestling history), so I was on board. And anyway, by the time Darnielle wrote this up on the blog section of the band’s official site, it was not so much about D&D, but was still mostly about a fantastical, mystical world. Darnielle explains: ”This album began life as a rock opera about a besieged seaside community called Riversend ruled by a benevolent wizard, for which some five to seven songs were written.” He goes on to say how he usually dreams up these grand themes and then ends up breaking from them, and he goes on further on the amazing podcast I Only Listen to the Mountain Goats. More on this later.

Head Mountain Goat John Darnielle is always pushing for growth, as any songwriter should be. His songwriting was already top-notch in his early boombox-fidelity days, and he is considered by anyone who has ever spent any time with the band to be a lyrical master. He spent his first decade working with brevity, telling tales within a 1 ½ - 3 minute span. In his second decade, of which we are nearing the end of, he has stretched his songs out, with the help of the musical talents of his band and collaborators. When it was him and a guitar, he got in, got out. Since 2002’s Tallahassee he gradually started utilizing piano and other keyboards, strings, woodwinds, brass, and choirs. We get most of these elements on In League With Dragons, to great effect.

On Dragons, for the first time, Darnielle places his full trust in a producer. He likes to maintain control over his songs, rightfully so as they are very personal to him, but he found a talented arranger in Owen Pallett. I became acquainted with Pallett when he worked with Arcade Fire in their early days, and as Darnielle tells on the podcast, Pallett is the first producer to get this level of input into the musical decisions on an MGs record. As a result we have the most lush Mountain Goats record to date: Pallett was the perfect producer for the album. Coincidentally, going back to his early days when he was calling his solo act Final Fantasy, we find an album he wrote about the 8 schools of Dungeons & Dragons for his ludicrously-titled 2006 album He Poos Cloud. I don’t know if this thematic similarity had anything to do with why he was chosen, but musically he was a perfect choice as well. Pallett is a schooled musician as well as a rock and roller, so not only does he know how to write string and woodwind arrangements, but he can fit them perfectly into the indie rock setting of the Mountain Goats. Songs here may include as many as three keyboardists, with piano and organ playing a large roll in the record, and a (much coveted, very expensive) Memorymoog appearing on many tracks, usually in ambient capacities or doubling organ parts but it peeks its head out for some prominent filter sweeps on the closer “Sicilian Crest.” Like I said, it’s one of the MGs’ most lush records.

At Blackbird Studios in Nashville, Darnielle utilized an echo chamber, harnessing natural reverb by singing into a 20-foot long room. He says on the podcast that while he admits he may not be able to tell the difference between that natural reverb and a reverb plugin, were someone to test him, he says how it helped him to get the best takes he could because--to paraphrase--it felt epic as hell to shout into the chamber.

“Passaic 1975” is the hit that pops out immediately in the vein of The Sunset Tree classic “This Year,” this one about an aging rocker who is out of control, blacking out on stage mid-set, but he wants everyone to join in the drugged-out debauchery. It’s got a strong backbeat and an instantly-singable chorus: Tell the person next to you / I want everyone to get high. / Tell your boss, tell your mother / I want everyone to get high” and this Hoosier is pretty fond of the end of the 2nd verse- after hitting Passaic, NJ and Memphis, ”Sometimes I wake up coughing up blood / Tonight Indianapolis, tomorrow the flood.” The song is not about the wizard but maybe the “magic” is… drugs? “Going Invisible 2” is another standout, an atmospheric and epic song of destruction. It’s a sequel to a song that’s a b-side from 2006’s Get Lonely-- an odd thing to do (though it does make people go back and revisit your old stuff and forgotten tracks)--and in the first installment the guy just wanted to break stuff after a breakup. In this one, he wants to burn it all the fuck down, and sweep all the ashes away under a blanket of reverb and tasty pedal steel guitar. “Younger” is in turns an ambient and boppin’ number, though the sax solo near the end is total 80s cheese. Other than that, it’s another standout in a really strong tracklist.

Returning to the post Darnielle has on their website, we get an explanation for further breaks from the whole dragon thing: as I thought about my wizard, his health failing, the invasion by sea almost certain to wipe out half his people, I thought about what such a person might look like in the real world: watching a country show at a midwestern casino, or tryout pitching for an American League team years after having lit up the marquees. The former he referring to is “Waylon Jennings Live!,” full of more tasty pedal steel, appropriately, and the later “Doc Gooden,” a toe-tapper with some old-west acoustic guitar lines.

I should probably wrap this up, but I can’t say enough about this record and I’m excited to learn even more about each song as this season of I Only Listen to The Mountain Goats continues. In League With Dragons is yet another amazing addition to the Mountain Goats discography. It’s wizardry has taken ahold of me.

Year of the Knife: Ultimate Aggression