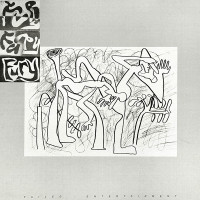 Malaise is defined as “a general feeling of discomfort, illness, or uneasiness whose exact cause is difficult to identify.” The feeling of malaise hangs over never fully realized, but seems to permeate through the cracks of anxiety. Always questioning, but never coming to an answer. This particular feeling does not resolve itself nicely, instead doling out unwarranted advice in listless infirmity. When the feeling resides personally and intertwines with a cultural moment, records like Fury’s new album Failed Entertainment are created.

Failed Entertainment deals candidly with today’s malaise. The record exists in the spectrum of hardcore bands expanding their musical horizons, but doing so with forethought. Immediately, Failed Entertainment offers sonic differences between Fury’s past output. The album contains a nice coat of grungy sheen to the rollicking guitar, vocals with more melodic underpinnings, and greater experimentation of tempo and dynamic within the tracks. Albums like Ceremony’s Rohnert Park and Blacklisted’s Heavier Than Heaven, Lonelier Than God are good comparison points. Failed Entertainment is likely to draw some comparisons to Fugazi as well, although it never comes across as derivative. There are a few lyrical nods as well throughout the album to the post-hardcore legends.

The production on Failed Entertainment is a highlight. There is a lot of range from song to song while still remaining a heavy album. The best place to point for evidence of this is closer “Crazy Horses Run Free” where the band grooves in large shapes of sounds with clean backing vocals and expressive percussion from drummer Alex Samayoa. “Vacation” does a nice job highlighting the raspy bass lines of Daniel Samayoa and contrasting guitars of Madison Woodward and Alfredo Guiterrez. Breakdowns like those on “Inevitable Need to Reach Out” come close to Baroness territory. However, the highlights on Failed Entertainment are not just the musical expansion Fury demonstrate, but the album’s central themes.

Lyricist and vocalist Jeremy Stith provides a nuanced introspection often not found in hardcore. While hardcore can often be preachy, Stith is contemplative here laying out unanswered questions and the role malaise plays in it, both cultural and personal. While not overtly political, the lyrics capture the feeling of hopelessness caused by the intersection of apathy and our political culture, a deadly mix for any young adult who’s been paying attention. One also likely to be relatable if the weight of the world is weighing heavy on you.

The banal moments in life are hard. Failed Entertainment captures the self-doubt of those moments, the expressions of joy that are hard to find to in that headspace, and the feeling that everything is out of your control. As Stith sums up in “Goodtime,” “Time remains / I’ll take that as a sign.”

Not On Tour: Growing Pains