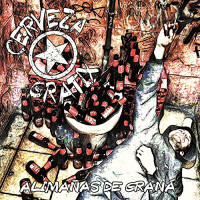 There are several ways to make up an album. Musically speaking when it comes to punk it could go either way whether you accomplish a social cry and speak out in more activist terms or you could shoot that aggresively fun vibe punk bands have skimmed.

The depths Cerveza Gratix has swam into build up quite a contrast which makes the album a subjetc of interest. When analysing the musical tropes and structures, the genre would not be defined in purist terms. More likely to be compared with the spanish punk rock of the early 90's but surviving twenty years later with choking chorus and freshness.

When talking about punk rock in the context of the few ones that are still brave to touch spiralling issues , there are little bands that come to mind.

Regardless the topics, these lyrics can be quite controversial but still trated with taste. The music, on the other hand, is surprinsingly not an obvious dirty riff, the bassline is not noisy and the voice is melodic rather than screamy.

The name of the album itself refers to a concept, maybe appealing the members or the listeners, but describing a nightly creature that inhabits the bars' bar.

The punk spirit still subsist in songs touched by the hand of sarcasm and subversion which makes the line of the album complex and catchy at the same time.