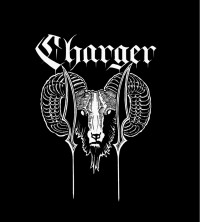 Holy Motörhead! You don’t have to look far to find Charger’s single biggest influence. They warn you before the needle even hits the groove. The stylized but classic looking ram’s head on the cover is in stark black and white, and is more than a little reminiscent of the easily recognizable warpig logo. The inner sleeve has a picture of their practice space, and a Motörhead England poster hangs near the middle. This is no coincidence. There are other strategically placed posters too. Dio, Black Sabbath, X, UK Subs, Joy Division, Iron Maiden, Neurosis and others all get space on the wall. Those influences are there in smaller quantities too, but Motӧrhead is at the center of it all.

And why not? If you’re in a band led by a bass player, why not emulate the greatest bassist led band of all time? Charger is the new project from Rancid bassist Matt Freeman. Freeman does a pretty fair Lemmy impression in terms of vocal style, and even in songwriting. Drummer Jason Willer handles lead vocals on two of the seven tracks, and he also channels Lemmy’s raspy growl. Not surprisingly, the bass is prominent in the mix. The guitar alternates between chugging, bluesy riffs and singing, bluesy leads. The drums propel things like a runaway locomotive. The songs are fast and heavy, but have an undeniable ‘70s hard rock flavor. After all, Lemmy would only ever describe Motӧrhead as rock and roll.

All seven songs are well written. All the songs on Charger are deathly serious too. They mostly make up for the lack of levity with pure catchiness. “Crackdown”, “Victim”, “Damage”, “All Kings Must Die”, “Pray For Light”, “Fall Out” and “Dragged Down” will have you shouting along in no time. Sometimes the sheer volume of Rancid side projects can be a bit intimidating. (If Pirate’s Press Records only put out Rancid adjacent releases, they’d still be a decent sized punk label.) The self titled debut EP from Charger is definitely one you want to check out.