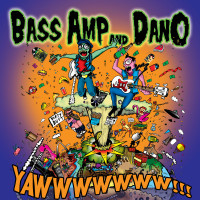 That’s seven ws and three !!!s. I counted twice. Bass Amp and Dano are a punk duo (plus a drummer) from St. Louis, MO. Ironically, Bass Amp is the guitar player while Dano handles the four string duties. I saw them a few years back opening for Sloppy Seconds in STL at a great dive called FUBAR. I didn’t remember much about them, but I blame that less on them and more on my own heroic consumption. After giving Yawwwwwww!!! multiple listens, it’s starting to come back to me. This album was recorded by the legendary Joe Queer, and The Queers are certainly a big influence. The two bands previously released a split 7” on Failure Records & Tapes.

BA&D remind me most of a cross between Nobodys and Antiseen. Like Nobodys, Bass Amp and Dano write short, stupid, and funny punk songs. In the grand tradition of the Ramones, the song titles usually tell you almost everything you need to know. The choruses are catchy and repetitive, and almost always contain the repeated name of the song. “Dave’s Got a Little Foot”, “I Feel Like Shit” and “I Hope You Die” are all good examples of this. Like Antiseen, Bass Amp and Dano are good at lampooning the weird combination of patriotism and Southern pride that you find in many rural areas. In other words, they make fun of rednecks while acknowledging their own redneck tendencies. “I’m an American”, “I Love Shootin’ Stuff” and “That’s American” all fall into this category. The opening track is even “The Pledge of Allegiance” set to music.

There are some songs that really hit the mark like “I Don’t Care About Anybody (But Myself)”, “Fuck You, Katie” and “Ready For Action”. There are others that miss like the country fried “My Old Lady Clogged the Shitter Again” and the mostly chanted “I Got so Drunk I Peed in the Sink”. This is not high art, but it’s not supposed to be. It aims for fun, and it succeeds. It’s definitely more fartsy than artsy. It’s good old fashioned shit kicking punk and roll. It’s what you listen to when you’re driving down a dirt road with a Busch Light between you knees. Antiseen refers to their music as Destructo Rock. Bass Amp and Dano and Yawwwwwww!!! might be Retardo Rock, but I like it.

The Get Up Kids: Problems