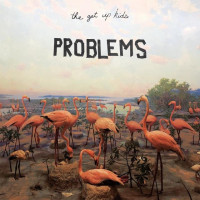 We all know that perfection is impossible. The true test of character is how you comeback from failure. How you bounce back and dust yourself off to take the same risk again in hopes that you get it right this time. That’s exactly what Problems is for The Get Up Kids: the attempt to make a triumphant comeback from an abject failure, and The Get Up Kids manage to stick the landing. When I wrote about their EP, Kicker, last year, I talked about how it completely forgets that the disastrous There Are Rules ever happened, but it would take a full LP to really erase the memory of There Are Rules. Problems accomplishes that in full, harkening back to Guilt Show and On a Wire and pretending There are Rules never happened. While I often prefer for bands to grow and experiment, and I appreciate the experiment that was There Are Rules for its ambitiousness, it missed the mark entirely. Problems grows the band’s style without jettisoning the entire Get Up Kids signature sound like There Are Rules did.

Every song on this album is strong, starting from the compelling opener, “Satellite,” which firmly establishes the return to the classic Get Up Kids style which is as strong of an opener as “Holiday” or “Man of Conviction.” “The Problem is Me” is one of the bounciest, catchiest pop songs that The Get Up Kids have ever put out. “Lou Barlow” starts and ends as a tribute to the Dinosaur Jr. bassist, and in the middle it fills in as one of Matt Pryor’s classicly angsty emo songs. “Fairweather Friends” succeeds thanks to perhaps drummer Ryan Pope’s best performance to date, giving an absolutely electrifying performance. “The Advocate” is a welcome return to the experimental style of On a Wire rather than the over-experimentation of There are Rules. And, while the first three Get Up Kids albums were notable for their excellent closing tracks, that sort of ended with Guilt Show’s mediocre closing track, “Conversation.” On Problems, they return with another strong ballad of a closer in “Your Ghost is Gone” and, while it may not be on par with “I’ll Catch You,” it’s certainly on par with “Michele with One L” and “Hannah Hold On.”

The Get Up Kids seem to be getting really active again, first with last year’s Kicker EP, then with January’s Pryor/Suptic side project, Radar State, and now finally with a full-length Get Up Kids LP in Problems. I’m hoping this recent uptick in activity from the band signals a desire to get back to making music again, and the band won’t make us wait as long for another album. Problems marks the band’s first album in eight years, and their first really good album in 15 years, so I hope we’re getting signs that The Get Up Kids are truly back this time. And if Problems shows the kind of music they’re going to be making this time around, I am glad to have them back!