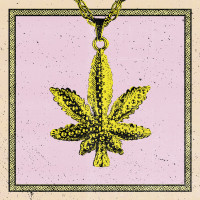 Despite hailing from far-off South Africa, Weed Dealer has clearly spent the past 15 years downloading MP3s from Midwestern Emo bands and East Coast pop punk bands. From the get-go, their debut EP, “The Chain”, sounds like a perfect example of modern American pop-punk. There are crafty, noodling guitars, flourishes of skate punk drumming, wafting melodies, and clever lyrics throughout.

While the musicianship on “The Chain” is top-notch, frontman Martin Barrios seals the deal with a powerful performance throughout. On the opener, “Algorithm & Blues”, the band makes a nod to golden-era Motion City Soundtrack with a smart, driving, catchy toe-tapper. And Barrios’ vocals tie it all together.

Fans of American acts like The Menzingers, Joyce Manor, and The Sidekicks will find lots to like on the EP without feeling like they’re listening to a cheap imitation. Weed Dealer has a unique sound in spite of their apparent influences. The single, “Common Taste”, opens with a rousing riff and quickly kicks into pop-overdrive. I guarantee that it will quickly get stuck in your head. Despite all of the aforementioned American comparisons, the accompanying music video for “Common Taste” is a patchwork of homages to homegrown South African music icons.

Clocking in at 10 minutes, “The Chain” is over just as soon as it begins. Luckily, these four songs are proof enough that Weed Dealer is indeed something special. It would be a real shame if they didn’t follow this up with a full-length.