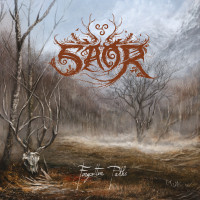 I’m not entirely sure how I’ve got to this point, having not been a black metal guy as a younger man, but I’m now finding myself drawn to it and listening to it A LOT. I have no problem with that, I should make clear - but as with all genres, it’s certainly not all gold. In fact the gulf between the best black metal and the worst is enormous, which is maybe something of a surprise given the relatively restrictive framework that bands have to operate within to be accepted as part of the scene in a lot of cases.

Which leads us to Saor. There could possibly be people out there who might contest their black metal credentials, but surely not many. Long-form, atmospheric songs, rasped, white-noise vocals, blast beats and the requisite ability to conjure a sense of the arcane. All of these are present and correct, but they only tell a small piece of the story. Saor is effectively a one-man project. That man is Andy Marshall. A resident and native of Glasgow, Scotland, Marshall refers to Saor as a genre in and of itself: ‘Caledonian Metal’. The music he makes features references to literature, history, nature and the rugged, majestic landscapes of his homeland. Sometimes when you read such things from an artist, you find yourself saying things like “I guess I can see that...”, but with Saor, it all makes perfect sense. Having spent some time in Scotland, I honestly feel like this music couldn’t have come from anywhere else. The national identity flows from your speakers or headphones as you listen to it. Throughout the record, there is liberal use of instruments that you might not find in your common-or-garden black metal record including flutes, bagpipes and various stringed instruments like violas, etc. Admittedly these are more regularly found in folk music, but rarely have I ever found them employed to such impact in a darker, more metallic setting.

Something that can be off-putting for people not massively au fait with the scene is the length of the records. Interestingly, Forgotten Paths doesn’t necessarily have this problem, clocking in at a relatively modest 38 mins, but that does come across a mere 4 tracks in fairness. As such, the songs do still have the necessary room to breathe, I’m glad to report; And it certainly is necessary. The scope and cinematic nature of the songs means reducing their run time would have genuinely affected the overall mood, which has a glorious sense of patient drama to it - and that’s something to truly treasure across the record. For example, the opening/title track effectively ceases just after the midway point, before being reintroduced with an atmospheric piano piece that then opens up with delicate bass drumming, folk-chanted, paganistic vocal lines, before the lead guitar drops in, reverb-laden, shortly followed by the more traditional black metal vocals – but backed by flute and violins. Given that this sequence doesn’t even begin until the second half of the song and considering the fact that it bears little, if any resemblance to the first half of the song, you can see what I mean about the songs being given the room they need to breathe and develop. Similarly, “Bron” smoothly travels through phases – varying degrees of intensity, disparate instrumentation and different vocal styles, including clean, ethereal female vocals – again, used to potent effect and evoking a borderline supernatural, earthy, gothic feeling.

I’ve seen people complain the record is too short, or it’s not as good as its predecessor (Guardians) - and they’re entitled to those opinions, of course. All I would say is that taking this record for what it is, I simply cannot accept that it’s anything other than incredibly successful. It’s haunting, uplifting and genuinely moving. Which I suspect is what Andy Marshall is aiming for. The compositions generated are done so with such skill and craft that were this a tech-metal record then maybe the result might be simply impressive, but such is Andy Marshall’s command of his style, it ends up being altogether more affecting. Yes, it’s very nerdy for those who don’t wish to be part of it, but I for one am delighted to be one of the nerds on the inside looking out.