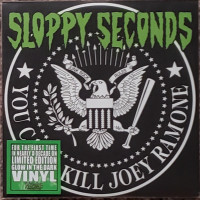 “You Can’t Kill Joey Ramone” was the fourth track on Sloppy Seconds’ 2009 LP Endless Bummer. On an album packed with great songs, it was a standout. Fortunately, somebody at Wallride Records recognized this, and the song was released as a seven inch single in 2010. Unfortunately, it’s been out of print since then. Now, just in time for what would have been Joey’s 68th birthday, this classic little record is finally getting a repress.

Like pretty much every other Sloppy Seconds’ song, “You Can’t Kill Joey Ramone” is catchy as hell. Of course, it’s a three chord punk song in the tradition of the Ramones. While there’s certainly an undercurrent of melancholy, it’s mostly an upbeat celebration of the man’s life. The simplicity of “No no no, Joey don’t go/Hey hey hey, don’t take my Joey away” will get stuck in your head almost immediately. Like Joey and the Ramones, the song has only gotten better and more significant over the last decade.

The B-side is a classic in its own right, “Can’t Stand Rock’N’Roll” by Anti-Nowhere League. The Sloppy Seconds version doesn’t get too radical, but does put the band’s own spin on things. While ANL has fallen out of favor in recent years, their 1982 debut We Are...The League is a undisputed gem. Both Anti-Nowhere League and SS were never afraid to wade into non PC waters, but neither ever came across as mean spirited.

This is everything you could hope for in a single. The A-side is perfect, and the flip is damn near perfect. Fellow vinyl nerds take note. “You Can’t Kill Joey Ramone” is available in very limited quantities. The 100 copies of glow in the dark sold out in presale. Only 400 copies will be available on hot pink wax. Don’t sleep on this, or you might have to wait another decade. This is definitely a record that all Sloppy Seconds and Ramones fans should have in their collections.

Palma Violets: Danger in the Club