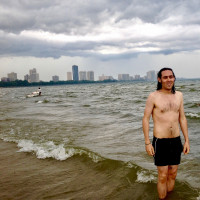 Martha first appeared on my radar about five years ago when I set up a show for them in Indianapolis. The pretentious poseur in me was excited just to have a chance to work with another international act. But I was still curious to hear what they sounded like. I checked out their debut record, “Courting Strong”, and was immediately blown away. Roaring melodies. Soaring harmonies. It was infectious pop music, but crafted and executed by crusty little anarco-punks. Squat-pop, if you will.

Flash forward a few years and Martha has exploded exponentially. The English quartet has only continued to grow; they’ve toured back and fourth across the Atlantic many times over, and their sophomore album (“Blisters in the Pit of My Heart”) was basically everybody’s favourite record of 2016. Everyone (in the Squat-pop-osphere) was waiting to see what Martha would do next.

“Love Keeps Kicking” was released earlier this spring and not a moment too soon. It shows the band continuing to learn and develop as a cohesive unit, which I can only imagine must be a bit complicated considering that the four members share writing and singing duties.

The album opens up with the alt-country-tinted “Heart is Healing”. It still sounds like the same Martha that we’ve all come to love and adore, but with just a bit of twang thrown in over the jangle for good measure. That very same twang reappears at various times throughout the record, including on the slow-burning closer, “The Only Letter That You Kept”. It’s not blatant as, say, the Old 97’s, but it’s enough to take notice. And it works well.

Through all the twang, however, the band still manages to find plenty of opportunities to do what they do best: jangly, bouncy, sing-along, squat-pop anthems. “Brutalism By the River” and “Sight For Sore Eyes” deliver the goods on this front but nothing on the album shines quite like “Wrestlemania VIII”. This is the Martha anthem to end all Martha anthems. It is absolutely pitch-perfect. It showcases all of the band’s signature elements at their strongest. This is destined to become a staple of their live show.

While “Love Keeps Kicking” doesn’t quite reach the heights of “Blisters”, it still packs a punch. A few of the songs struggle to stand out and seem to get lost amidst the jammers. Luckily there are enough of the latter to keep the squat-pop party going strong. Martha has done well staying true to the DIY scene that birthed them but with a string of great albums and increasing music media attention (Rolling Stone has even caught wind), it’s going to be hard for Martha to stay a secret for much longer.

Palma Violets: Danger in the Club

The National: I Am Easy To Find