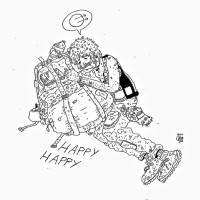 It is rare for me to describe an album as perfect; rare for me to call anything perfect. The connotation means that nothing can be better than it. Though I'm not calling this album perfect, I am giving it a perfect score. For me, it is among the greatest albums I've ever heard.

Lyrics, for me, can make or break a song/album/artist. They are what I long for when finding a new artist. Near anyone can play a guitar/bass/drums to a level that is worthy listening to, but only a few special people can take those sounds and integrate them with the written word in a way that provokes more synapses firing than the visual arts. The saying "A picture is worth a thousand words" does not apply when the wordsmith makes each of his words worth a thousand pictures.

HappyHappy starts the album with the line “Do you remember being choked in front of 10 to 20 people/Everyone said it looked so good” with his first track “27 Wagons”. The song goes deep into a personal conversation with the artist and what one can only assume is a past love. He takes responsibility for his part in the actions, while seemingly building up the past love, which as the listener, one temporarily becomes. The final verse leaves the listener a little more clear on what might have happened as he asks where he would be if things were different, and finishes with his thoughts on why things went the wrong way. “Oh the violence/and the substance abuse/and the silence/that I'm getting from you/is leaving my ears ringing/and I don't think that they'll ever be normal “ While the song started off with a memory, of likely a less than positive time of the lover being choked, it ends with the artist admitting that all of the wrong he did have left him changed, and likely never normal again.

Immediately following this dark, yet beautiful track comes a goofy take on a childhood drawing made by one of the artists friends, where he had “Laser eyes and Gatlin Guns for arms”. “I was a teenage cyborg” plays out the fantasy that all of us had when we were younger, what would happen if we had super powers? In the artists case, it is a symphony of destruction of all of the people in his town that had wronged him, or merely stood by.

The album continues light-hearted sarcasm to dark tones that one can only hope are also sarcasm. My favorite track “You really want those Ice Cubes,don’t you?” is likely the most clever use of metaphors I’ve ever witnessed, The verses tell stories about another lost love, possibly the same as before, but it's the chorus that takes this one to the top for me. The artist paints a metaphor of what the “bad times” in his brain remind him of, which is a perfect way to describe the mind of anyone suffering from depression/anxiety. He paints them as tenants in a rent controlled apartment, partying constantly, and refusing to leave. “They trash the place at least once a week/the security deposit won’t cover these thing/but I think they stopped caring a long long time ago” wraps the metaphor up so perfectly, and reminds me of the same demons so many of my friends fought against in their youth.

Flowing perfectly from song to song, similar to a concept album, the artist continues to paint pictures of his inner demons, failed relationships, wrong turns, and a little youthful stupidity. Towards the end of the album we get one of the most sincere looks, leaving a bit of the sarcasm to the side, as he creates his own mantra “Once a Loser, Always a Loser.” He starts by telling the listener that he always thought this was a phase, and that goofy high school kids always went so far in life, they just needed to grow into it, but very quickly changes his tone, admitting defeat. “Always the reject, never the first choice” leads the third verse, where he predicts his death at 29. Its clear, throughout the album, but especially in this song, that the artist, or the character the artist writes his first person point of view lyrics in, has a vicious fight with substance abuse, but this song pulls it to the front. He opens up, honestly and accepting, even labeling his cure “poison”, and then goes on to tell someone he loves, please don’t look up to me. Based on lyrics from another song, I feel he’s talking to his little sister, but I can’t be sure. The song ends with the chant “Once a loser, Always a Loser” and even my 8 year old son could not help but sing along as this anthem came to a close.

I could write about every song on the album with as much love and vigor that these few I’ve spotlighted, as the album, if not perfect, is near enough for me to suggest that anyone and everyone gives it a listen. It’s a toned down, honest look through the eyes of a man coming to face with himself. I can’t imagine how cathartic it was to write, because I felt relieved after my first listen, as if I too had just told the world all of my dark secrets, and freed myself from the bonds of my bad choices.

A new album is right around the corner and I can’t wait to hear it.