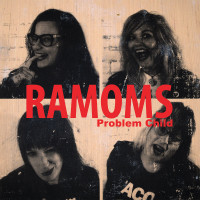 My introduction to Philadelphia’s Ramoms was their Christmas themed split seven inch with kindred spirits Dad Brains. While it was mostly enjoyable, it was almost novelty overload. I could see spinning Problem Child year round. There’s always going to be an element of novelty with Ramoms. After all, this is an all female Ramones tribute. There is no lack of self awareness among these ladies. That being said, these four scene veterans can more than hold their own musically. On Problem Child we get two Ramones parodies and a straight up cover.

First up on the A-side of this big hole 45 is “Gritty is a Punk”, a reimagining of “Judy is a Punk”. (Gritty is the mascot for the Philadelphia Flyers. I can’t speak to his punk cred.) Next is “Boogie Not Snot” to the familiar tune of “Blitzkrieg Bop”. The original words are replaced by tales of the trials and tribulations of motherhood. I’m not sure how I feel about about the parody lyrics, but I guess they’re good clean fun. The B-side is a much more standard take on “Rockaway Beach”. This is the strongest of the three tracks. As a matter of fact, this is what I’d most like to hear more of. The Weird Al treatment isn’t necessary.

Ramoms seems like a project that was started just for kicks, but then took on a life of its own. It’s been nearly 23 years since the Ramones played their last show, and it’s not likely that there’s much more unheard music coming. Their songs never get old. Bands like the Ramoms help keep their spirit alive, and records like Problem Child help fill the musical void left in their wake. Keep them coming ladies.

The Cult: Live in Grand Rapids