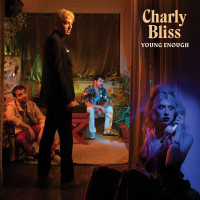 In 2017, Charly Bliss released Guppy to much acclaim. It was youthful and vibrant and 90’s alternative leaning. Two years later, Charly Bliss have released something else entirely. Young Enough is a big pop record with indie songwriting, and it’s great!

“Blown to Bits” opens the album with the promised explosion. While the songs remain excellent throughout, “Blown to Bits” is where Charly Bliss wins you over. The repetitive, tongue in cheek, “It’s going to break my heart to see you blown to bits!” is only made better by increasing autotune and the swelling music. “Capacity” follows and gives a better idea of the album. Hendricks has spoken about how a lot of Young Enough is about an abusive relationship, and it sees her seizing control. “Chatroom” especially finds interesting ways to deal with an emotional subject. She sings, “I was chaste in the chatroom, talking about you, everybody knows you're the second coming.” There’s so much irony dripping from her vocals, it’s beautiful. On “Camera” she warns, “How can I convince you not to stay? […] If you think it’s bad today, just wait.” Her voice makes her words sound light and fun, but she’s dead serious.

While Guppy’s 90s influence was clear, Young Enough’s overindulgent 80s edge hits you over the head. Synth-heavy sounds are everywhere, but Charly Bliss utilizes the sound and makes no apologies for it. Minute-long “Fighting in the Dark” sees Hendricks using exclusively keys to set up the central almost fun.-like title track. “Hurt Me” is a slickly produced ballad with twinkling keys. There’s still plenty of guitars but the new direction is constantly made clear.

Young Enough is better than its predecessor in every way, and its predecessor is very good. Every song should be a gigantic sing-along single, each with its own level of catharsis. If more pop songs had Charly Bliss’s sense of craft, pop music would be in a much better place.

The Cult: Live in Grand Rapids

Dude Trips: Through Love & Death, You're All I Have Left