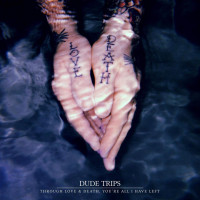 I don’t know that there’s a great deal of value in the term ‘emo revival’ anymore. Depending on who you talk to, emo’s either never gone away, or has been 'revived’ anywhere between 2 and 5 times in the last 15-20 years. It seems to me that the reality is that there are just occasional waves of bands who come along, vaguely working to a similar formula, but with their own contemporary take on the sound, and I’m not sure that constitutes either a death or a revival. The reason for this pontification/waffle is that I imagine the phrase will be thrown about with gay abandon when people are talking about Dude Trips in the coming months – and I suspect you will hear people talking about them, albeit maybe slightly less on the other side of the Atlantic from the band’s home in North East Scotland.

When you consider the album’s title, then the fact that this is primarily an emo record is probably not a huge surprise. It’s also where the great strength of the album lies, I would say. Songs like “Tampa Bay”, “Blank Canvas” and “Kit” showcase vocalist/rhythm guitarist Shaun Ross’ ability to deliver heartfelt lyrics in a genuinely affecting way. I know that sounds like a bit of a cliché in terms of emo record reviews, but there’s an authenticity to his voice that doesn’t exist in altogether that many vocalists. Undoubtedly, his heavy Scottish accent contributes to this, but his ability to move from a soft, conspiratorial utterance to a shirt-tugging rasp is truly a stirring thing to listen to. Second vocalist/bass player Jamie Mathers contributes lead vocals on a number of the record’s 10 tracks, and although he’s a decent vocalist in his own right, the tracks in question (“In Between Days”, “Sunday Club”, “Subbuteo”, “’91”) are very distinct from the other half of the record. Mathers’ songs are far more up-tempo and deal more frequently in nostalgic reminiscences than the more somber songs which Ross tends to front. As a result, the Mathers-fronted songs would arguably be more accurately described as pop-punk more than emo, giving the record a bit of a split personality. A bit like if The Dangerous Summer and Real Friends did a split record. (But if the former were on fine form and fronted by a guy from Aberdeen.)

I’ve already said that I think the record’s strength lies in the places where it commits fully to the emotional weight of the content and lyrics – and if you listen to the record as 2 EP’s as a bit of an experiment (which I’ve done a few times), then I stand by it. I don’t think that the ‘pop-punkier’ songs are in any way bad, I should make clear. They rattle along at a pleasant pace, the guitar lines are bright and the choruses will stick with you. I just don’t believe they play to the band’s strengths so much and the quality suffers a little as a result. That being said, I don’t know if a full record sitting at the more overwrought end of the spectrum would be entirely enticing as a prospect either, so I can understand why they’ve done it, even if I’m not fully on board with the songs themselves. Furthermore, when you consider the amount of references to death, regret and grand romanticism in the more emotionally weighty songs set against the album’s title, I can’t help but feel that these are the main crux of the record and other tracks do serve somewhat as palate cleansers, so it’s likely a conscious decision.

When the end of the record comes, (ending as it does with semi-title track “Through Love & Death”) I do feel that my emotional itch has been very competently scratched, and that comes courtesy of some impressive lyrics and songwriting, considered musicianship and intermittent but occasionally striking sense of the songs being entirely inspired by, and faithful to real life events. When you also consider that the band have been around for a mere 3 years and that this is their debut full-length, I think they’ve come up with something good. It’s maybe not the most original record I’ve ever heard and sometimes it doesn’t feel entirely cohesive as a single piece of work, but I’ve enjoyed listening to it and I’m keen to see what comes next. And I’m more likely to listen to it again than either Real Friends or The Dangerous Summer if I’m honest, but I’m aware that might sound like I’m damning with faint praise. It’s a strong first record. If you’re into the super earnest end of the emo spectrum, then give it a listen and you’ll find some tunes in here that you really like, I’m sure of it.

Bracket: Too Old to Die Young