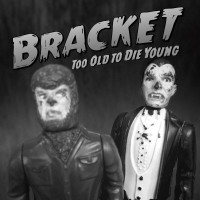 Bracket’s previous release The Last Page presented a sprawling concept album: a 70 minute single track which was their most ambitious project to date. At the time they indicated that they already were working on songs for a new album, which would have a bigger sense of immediacy. While it took three more years for8 that to actually come to fruition, Too Old to Die Young is now out, and Bracket has nailed it again.

Immediately upon listening to this album the seasoned Bracket fan will feel nostalgia tapping them on the shoulder. It plays very stripped down, and lacks what are now common tools in Bracket’s bag of tricks: the strings and other instruments which have become a regular part of their repertoire. Instead they’ve packed eleven songs into a slim 26-minute run-time, which makes it their shortest LP to date.

While the songs may exude a sense of urgency, harkening back to some of the earlier, poppier days, it is still obvious that these guys have been around the block a few times. Their skill at combining harmonies, quick changes, and clever (if almost always self-disparaging) lyrics has been honed by several decades as a band (and two decades since the last line-up change). In a way the more minimal approach to this album actually serves to showcase what they can do with the multi-layered vocals and, especially, the stylish guitar work that echoes the 60s and 70s rock that the band cut their teeth on in their nascent days.

One thing that definitely struck me is how much more personal this album seems. Many of the songs deal with age and all that encompasses. Themes like doing the thing you love your whole adult life without seeing success (“Artist Starvist”), especially in the face of others who ARE successful despite their superficiality (“A Perfect Misfit”). I’ve often felt that Bracket’s songs craft a narrative, but that that narrative is usually just fiction and clever wordplay. But on Too Old... it is almost like this is Bracket’s over-the-hill album, only instead of completely wallowing in it or buying Corvettes, they are expressing how this is affecting them to the world the way they know how: via their music (apologies to guitarist Angelo Celli, who is several years younger than the other members, and hasn’t crossed that 40yo threshold yet).

And, of course, there is a “Warren’s Song.” Number 29, to be precise. Starting with a very hard punk intro, the song then shifts to a slow, bopping song complete with the most Beach Boys-esque backing vocals on the album and some nice solos that even your parents (or grandparents) could tap their feet to. Poor Warren, the guy never seems to get a break (or make the right choices).

Overall this is a fun, down-to-Earth album that is likely to please the old guard of Bracket fans as well as bring in a new crop of people to check out their music. If you had to plug it into Bracket’s discography based on style instead of chronologically, it would likely fit into the Like You Know/”E” is for Everything… period of time. It is by far their cleanest, most straight-forward pop-punk in quite a while. It is great to see a band which has put out so many great albums, flitting back and forth on the genre-scale, prove that they can take a step back to their roots and still create new music with the best of them.

Dude Trips: Through Love & Death, You're All I Have Left