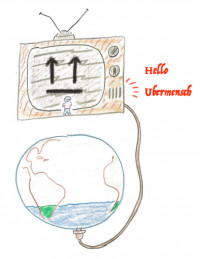 To avoid being labeled as the guy who only writes about Folk and Crust Punk, I picked up a copy of a newer Houston Band’s EP “Hello Ubermensch”. I had heard of these guys through some of the same avenues that I’ve been introduced to a lot of the Folk Punk I’ve been exploring, but these guys are far from Folk, and are more reminiscent of some of the more melodic Post-Punk records that were being put out about 20 years ago.

The EP is interesting in its track layout. The first track is near six minutes, and is followed by a two and half minute banger, then back to five minutes, and finally two more short tracks. At first glance this made me believe that they just threw together the few songs they had written together so that they could have something out, but after listening a couple of times, it was clear that the band knew exactly what they were doing.

The first track “The Beat Goes Down” is most accurately described as repetitive. The chorus and guitar riffs probably equate to 70% of the near six minute song, but for whatever reason it is absolutely infectious. The first time I played it, I found myself singing along before the track was over. And after a second listen, I realized that there were subtle changes sprinkled through the track, which added a layer of sophistication that was not only unexpected, but very clever. This track could easily be on modern rock radio, and maybe even in a dance club or to, yet it carries the punk ethos with it from start to finish. This was, for the first couple listens, my favorite track, despite how basic and repetitive it was. Again, infectious.

The second, much shorter track, “Nature’s Revenge” you would expect to have a quicker tempo, but they slow down, and focus more on Jeffer’s ability to construct a story with his lyrics. The music still has that vibe that could get the band airplay on the radio, but without even trying. Its basic, yet complex, and drags you into the third and title track, brings back the repepetive, and infectious feel of the first track, but blends with it the complex vocals that were found in the second. The band shows you one side, then the other, then like magic, shows you how amazing the two sides can be when blended together. All three of these tracks would have been huge radio hits in the 90’s when rock (punk) had a chance to actually make the radio. “Why run away from the pain if you’re dead anyway,” sums of the theme of the song, as Jeffer belts it out before the final chorus.

My favorite track follows, and in the footsteps of their now blended pop sensibilities with well written lyrics. It’s a quick track, but Jeffer’s vocals really shine, and while his guitars also shine, it’s about this time in the EP that you realize how good Jack (bass) and Gabe (drums) are at supporting him with their rhythm section.

And as soon as it ends, Jack starts the final track with a call to arms, “I said, Fuck the Border Patrol,” which is followed by an absolute sick bass line. Jeffer comes in with guitars and vocals, and his writing is definitely at its best here. A quick google search led me to a story about Jeffer and Jack’s trip to Big Bend, where at a standard border control stop, Jack, an immigrant from Scotland, was harrassed by a border patrol trooper who claimed he did not have all of his paperwork in order, and held him custody for near 12 hours. Needless to say, a bunch of white guys singing about the Border Patrol would normally come off as a bit cliche, but in this case, you can feel their animosity as it bleeds out of the lyrics, the bass, and the guitar.

This EP has been on heavy rotation for me, and I only wish it was longer. I’m not normally into these types of bands, where the music feels almost “dancy”, but this band found a way to do it without coming off as cheesy or annoying. I don’t know that these guys really fit into any category, which might be why they do it for me, but I’m very curious as to where they are going to take this amalgamation of musical styles when they put out their first LP later this year.

Bracket: Too Old to Die Young

Wild Side: Who the Hell is Wild Side?