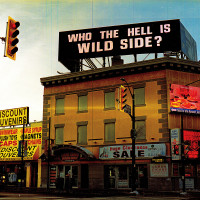 Wild Side's debut full length has been a long time coming. Guitarist Emmett Morris even went as far as to call the album hardcore's Chinese Democracy in a recent interview. The quintet from the Canadian side of Niagara Falls started tracking Who the Hell is Wild Side? in 2016, after some well received demos in 2014. Fans finally had something to latch onto early in 2019, as the record was announced with one of the coolest "marketing campaigns" in recent hardcore history. Triple-B Records went all out and purchased a billboard on top of a building in the band's hometown. The cryptic visuals ended up on (probably) thousands of Instagram stories, garnered some well-deserved momentum, and ultimately gave the album it's striking cover art.

All the waiting and hype was worth it. ...Wild Side? is an absolute delight. By no means is it a revelation, but it deserves to be mentioned in the same breath as recent full lengths from label-mates Mindforce and Candy. I've seen two publications compare the album to Warzone. Full disclosure, I've listened to Warzone twice in my life, so I have no fucking idea if that's true. I will say ...Wild Side? is "straightforward hardcore" -- late 80's worship congruent with the Triple-B and Lockin' Out Records style. The album has a meaty, New York flavor, with chunky grooves and fast, shreddy solos. Vocalist Brandon MacFarlane's bark is gruff, but surprisingly understandable. It took me a while to warm up to his vocal style, but the personality shines through after a few listens. He provides tons of melody and quotables, especially in the songs with defined choruses.

The album's song structures are pretty dense, packing lots of twists and turns. Usually, this pays off. Most evident -- the 2:15 long thrill ride "No Man's Hoe". A few of the songs devolve into riff salad and don't really go anywhere, but this is a rare occurrence. Plus, almost all the songs have at least one riff you can dance to. The album doesn’t overstay its welcome either. An ancient hardcore proverb states "'tis better to cut to an EP than stretch to an LP." I think this album would be perfect as a six-song EP, but ten tracks, most of them under three minutes, is still totally palatable in one sitting.

Hardcore's biggest bands release massive records in 2017 and 2018. It seems the stalwarts have given the little guys some room to breathe in the first half of 2019. Who the Hell is Wild Side? is a record that should benefit from that breathing room. It's catchy, clever, and fun. Kids all across America should be tearing up the dance floor when Wild Side hits the road with Fury later this year.

The Silver Machine: Standing on the Bare Ground