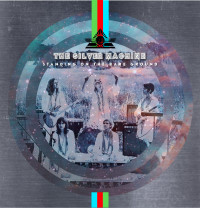 The Silver Machine might borrow their namesake from Hawkwind mythology, but thankfully, this release isn’t pure Hawkwind worship. You can’t out-Brock Dave Brock and you certainly can’t out-Nik-Turner Nik Turner. So wisely, the band uses the general cosmic ethos of the iconic space rockers and transforms that into something as inspired by Hawkwind’s own inspirations as it is inspired by the acid-naughts themselves.

Standing on Bare Ground thrives in big, open spaces that often recall the huge emptiness of space itself. “Repairable Eyes” is built around a buzzing synth and huge, echoing drums that are omnipresent as they lumber through the track. Cold, oracle-like vocals drift across the track, at times recalling the animism of mid-period Slits and the cold nihilism of Chrome. Plus, tracks like "The Insect" are just fun for their sci-fi weirdness.

The band maintains a cold, calculation across the both sides. Where many psychedelic bands like to wash across a warm fuzz, Silver Machine is decidedly more threatening. Where many Hawk-derived bands conjure the happy upswing of an acid track, the desolate remoteness of Silver Machine is more like a mind trip made not for fun, but for expansion. That is, as the hard crack of “Color of the Sun” races forward in hard edged distortion and propulsive base, this isn’t necessary about feeling good- it’s about exploration, which is often scary.

The fact is, most genres which can be described in a sentence or two have been done to death. Is there anything left to be mined from d-beat, Ramonescore, or, yes, even straight space rock? Standing on Bare Ground works to steer away from being pure “space rock” and launches itself into a different sort of more menacing galaxy. Sure, the hallmarks of mindtrips and space warping is here, but in lieu of warm fuzz we get cold distance. This might be one small record for a band , but it’s a significant leap for bandkind.

Wild Side: Who the Hell is Wild Side?