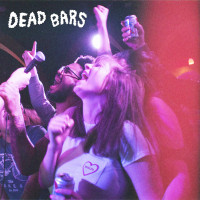 A recent article in the New York Times titled “Why You Need a Network of Low-Stakes, Casual Friendships” makes the case for having a neighborhood network of individuals you run into everyday. Having this type of connection to your community increases happiness. We are talking about the bartender that puts down your favorite shot and beer combo without asking, a barista who charges you the customer special, and the small, but important talk often found in your favorite hangs. So when Dead Bars sing “The bartender said how was your day / I said it’s just another day / Another day in paradise," what they are describing is just that.

And that’s a great summation of Dead Bars debut LP Regulars. Regulars is collection of the weeknights you find yourself at closing time, the innate desire to be a part of something bigger, and the fits and starts of developing friendships as an adult. On stand out track “I’m a Regular,” Dead Bars pack all of this into a four minute plus power-pop song that never drags. The band sings “And it weighs on me / I’m living like a refugee / I’m a regular / Nobody to see” perfectly placed in between muted power chord crunch and a guitar solo that sounds like it came right from a bar band.

Dead Bars expand on the sound they developed on their first release Dream Gig. Songs like “I Need You” and “Lucky,” an ode to making it to the Lucky Liquor store before it closes, are sure fire pop-punk jams coated in grimey garage rock sheen. “Time Takes Away” uses more classically influenced guitar rock licks that fit surprisingly well with the gruff and shouted vocals Dead Bars center. Another new addition to their sound is the expansive harmony work taking place across the album which adds a new dynamic to their sound.

What makes Regulars so much fun though is the lyrical content. While sometimes bordering on silly for the point of silly, there is an earnestness that shines through in most of the songs. Lines like “time takes away / that’s the way it goes” will embed in your ear like the barfly with an opening on an abandoned glass. “No Tattoos” is a hilarious ode to being the only un-tattooed friend in your group. The aforementioned “I’m a Regular” and “Lucky” are meant to be shouted along with replicating the album’s artwork.

Dead Bars’ Regulars is an excellent debut hinting at even more lurking underneath these pleasing power-pop, beer soaked jams. The glass is half full here, even if it is closing time.

The Silver Machine: Standing on the Bare Ground