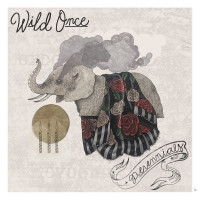 Wild Once is a step in a new direction from the members previous bands, shifting gears from punk rock and hardcore to an alternative/indie/dream-pop style. The songs are well written and refined and come as a result of a long-standing musical chemistry between the members. Perennials immediately draw the listener in with the hook driven record opener “Reruns” and commands attention throughout the relatively brief EP.

Wild Once feature relaxed and dreamy guitar lead work laid over top of tight drumbeats, and soothing vocal harmonies. Tom Mayer’s vocals move seamlessly through the tracks with a thoughtful and catchy croon. Each track features a prominent vocal hook that creates a nostalgic vibe. The band’s sound brings Dinosaur Jr. to mind with a heavy nod to contemporary bands such as Turnover and Beach House.

What stands out most about Buffalo’s Wild Once is the above-mentioned chemistry between the members. This is not the typical debut EP that one may expect, the band put together a record that flows and blends better than bands that have put out several records. All of the songs featured on Perennials are catchy and noteworthy, but together they bring the EP full circle, and keep the listener away from the skip button throughout the listening experience.

Wild Once are a great new band that deserve your attention. If you are a fan of pop punk, dream pop, 90’s alternative or indie rock, this band will keep you entertained. I am very curious to see what the future holds for this band - good things are undoubtedly on the horizon.

Latte+: Next to Ruin