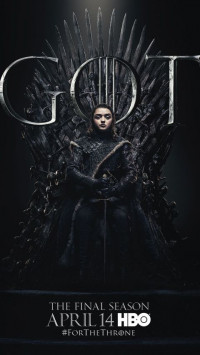 It's safe to say Game of Thrones isn't just a pop culture phenomenon, it may well be the most popular and hyped-up TV series ever. With the series officially done, surely fans are going to be comparing the ending to what they're extrapolating for whenever George R.R. Martin finishes the books (if he ever does...) but what we can do is forget those novels and look at the medium where it's no longer proper to consider it an adaptation but a truly new path as of Season 8. With that in mind, did it deliver the goods? Well, quality-wise, the story left a lot to be desired but overall, in terms of spectacle and style (yeah, I wish we had more substance) it does a decent enough job.

Firstly, I don't agree with the petitions etc. It's a TV show so if it sucks, whatever. Nothing turns out the way we planned and I do like how HBO and the show has always stuck to this unpredictable nature. Whether you've read the books or not, there are some surprising moments and even those that were foreshadowed were pulled off rather well. Dany's descent into madness, Bran being elevated to the King, Jon Snow and Arya realising the wilderness and wandering is their true path, etc. are all fine endings, but this show desperately needed two more seasons prior to this. Character development dropped off and we missed the monologues, exposition and core dynamic/fundamental of key relationships. I didn't buy into Jon and Dany's romance or loyalty, nor to Cersei and Euron (which sucks because the latter's likeable but feels like a plot device for a medieval Maury show or to go dragon hunting).

Even Bran's arc need a lot more fleshing out before we got to the finale. I didn't connect emotionally to what was going on even though I knew they were heading down that road. Simply put, the journey felt short-sold and rushed to some destination, no surprise give David Benioff and D.B. Weiss probably just wanted to jump on their Star Wars ship asap. I also didn't like certain arcs like Jaime deflowering Brienne and then running back to Cersei. I didn't want him to killer her but I thought this devalued Brienne and was simply making her a tool to fool us into thinking Jaime was good. I enjoyed him still loving Cersei but again, there was a lot of meat lacking in how they parted and then stayed away from each other. I guess Tyrion's story makes up for it but still, I didn't feel their love as they died.

As for the battles, the Hound and Mountain stole the series for me, as well as the political and verbal war Varys was waging. MVP's yo. I did enjoy the battle at King's Landing, as we got to see Drogon cutting loose, but I must admit that dark aesthetic for the war at Winterfell threw me off. It was hard to see and I don't need that bullshit of "adjust your TV." Shame we didn't get more direwolves, zombies, dragons and hey, ice-spiders, but a nerd can wish. My biggest issue though is how they treated the Night King like Snoke... seriously, what was his real purpose? To kill the mobile library? He was built up and fizzled out so fast like a snow cone melting in the heat. Also, shame we didn't find out about the Craster babies (I'm not buying that shit about them rapidly ageing and being his long-haired generals), or how the prophecies were wasted. The Prince who was Promised, the "green eye" kill for Arya, plus all the other stuff the witches spoke of fell by the wayside and it became clear HBO had to piss away these sub-plots.

All in all, I enjoyed the real world dynamics of politics and war meaning there really are no heroes here. One man's terrorist is another's freedom fighter, and as we saw with Dany, people don't want you to do what's right, they want you to do what's right for them. Drogon proved to be the smartest character as he melted the symbol of corruption and headed off to a new land, reminding us if we want to break the wheel, sometimes we do have to stand up as a society to the ones we love. Not a bad way to go out, but certainly not as strong as past seasons.

Geoff Palmer: Pulling Out All The Stops

The Damned/X: Live in Chicago