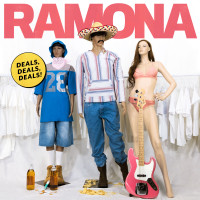 Deals, Deals, Deals! is filled with ten choice cuts of aggressive pop-punk music. Growing in all aspects since their debut Sad Brunch, the album is filled to the brim with bratty melodies, double time drums, and punchy guitar and bass. Perhaps due to the production by Defeater’s Jay Maas or to a touring schedule that put the band on bills with stalwarts like The Lawrence Arms and The Menzingers, Deals, Deals, Deals! hits with an urgency not previously found on Ramona releases. The sheer aggressive production value on the guitar and bass puts this sonically in the same territory as Dillinger Four. Shannon Ledbetter’s drumming will connect with anyone who still thinks about Scott Raynor’s efforts on Dude Ranch.

Over the course of a 27 minute runtime, Ramona jump from one hook to the next without pausing to reflect. “I don’t wanna fall in love / I’d be better off alone / Don’t want to watch it fall apart / Don’t wanna chance to disappoint,” admits guitarist and co-vocalist Diego Medrano on “Hard Sulks.” A track later on “Is This Emo?”, Vigderman resigns herself to familiar patterns noting, “When I’ve seen it all before / And I know that you’ll get bored / Put your hands on me / Mold how you want to be” with moving effect. Throughout most of the album, Medrano and Vigderman trade vocals, often joining together on the chorus to deliver the hook in bittersweet harmony.

The back half of Deals, Deals, Deals! finds Ramona starting to experiment outside of their pop-punk roots. The aforementioned “Getting There” and “Mambo 69” explore varied song structures and a larger spectrum of dynamics. They both build tension throughout before ending on a high. Along with “Not Your Token,” the lyrics also take on weightier topics including identity, community, and existential apathy.

Deals, Deals, Deals! is everything a good pop-punk album should be. Melodic, energetic, raw, and fun. A celebration for your highs and a comfort for your lows. In spite of life's all, it's certainly fucking better than only being ok.

The Damned/X: Live in Chicago