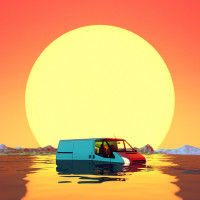 I’ve been listening to music with a critical ear for more than 30 years. It’s not very often that something catches me off guard. That is to say, it’s not very often that a record makes me wonder, “What the hell is going on here?”. That’s where I found myself with Downtown Brown and CaliFlorida. I remember having a similar reaction the one time that I saw them live a few years back. Downtown Brown has actually been around since 2001. The trio once called Detroit home, but has since relocated to sunny Los Angeles.

At this point it appears that DTB is primarily guitarist/vocalist/keyboardist Neil Patterson and a rotating rhythm section, along with a cast of guest/backing musicians. The sound is difficult to pin down combination of ska, punk, folk, metal, funk and soul. It might be easier to describe some of the bands that I hear bits and pieces of. Sublime, Fishbone, White Trash, Faith No More, ‘90s Butthole Surfers and 311 all come to mind. The Fishbone comparison is especially understandable. Fishbone’s bass player, Norwood Fisher, played on three of these songs.

The title track kicks things off and covers a ton of musical ground. (I found myself looking at the grooves more than once to make sure the needle hadn’t moved on to the next track.) It starts with a laid back rap, which leads to some mellow ‘70s singer/songwriter style singing and then some reasonably fast/hard rocking. “Yer So Cute” is pretty much a straight up ska song. “Cool” is a clever ska song with a heavy dose of funk. “Bathroom Door” is relatively straightforward punk/thrash/speed metal song (except for a brief passage of funk), with some pitch harmonics and maybe even some two handed tapping. “Live Today” is an upbeat but sort of depressing ska song with the words “Live today so you can work tomorrow”. “GF BF” is a hard rocker that deals with the emotional difficulties that come with non monogamous relationships.

The first side covers a dizzying amount of musical ground, and the second side might be even more diverse. “Love Kitchen” is a profane blue eyed soul song with a modern sounding twist. It’s music to make non traditional love to. “Outta My Mind” is another genre defying tune. It features a swirling, psychedelic guitar solo, and might have the record’s catchiest chorus. “Allie’s Song” is an instrumental, the first of two on side B. It’s shockingly pleasant. The extremely catchy and sincere “One More Song” continues the pleasant trend. I swear it could be the theme song for a sitcom. “Gone Fishin” is the fast rock instrumental that wraps things up.

CaliFlorida was recorded in at least five different locations in Michigan, California and Illinois. It also includes 18 (credited at least) musicians. On top of that, the musical styles can vary radically from one minute to the next. Against all odds, the record doesn’t really feel disjointed. It mostly makes sense within its own weird context. I’m not a big fan of ska or funk, but I really found myself enjoying this. I’m officially a Downtown Brown convert. I still don’t think I fully understand CaliFlorida, but I recommend you check it out anyway.