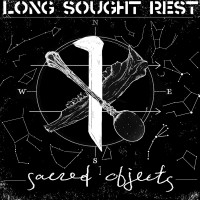 As I’ve recently started writing these reviews, soley for Punk News, I wanted to ensure that I wasn’t just writing articles about bands I was already obsessed with, so I went to the Social Media to gather suggestions for albums to review, and hopefully, in that process, I would find new bands that I could add to my list of obsessions.

The first band that was referred to me was Long Sought Rest. It came from a buddy who knows how much I am digging the burgeoning folk punk scene, and he advised that it would be up my alley. To quote him directly he stated “It’s sooooooo good.” On that recommendation, I went to band camp to find out what they had released, and found that an EP had just dropped on May 14th. It seemed serendipitous that a suggestion for me to review would also have an album that had just dropped, so I immediately purchased it.

Off topic, but I hate the “Pay what you want” on Band Camp. The business man in me wants to give them $0.25, but the punk in me wants to pay $150.00 for a digital EP, you know, to help the band. I didn’t spend either of the above amounts, and gave what I felt was appropriate for a digital 6 song EP, but if they had put a price on it, say $8-$10, I would have paid that.

I threw it on in my car for the first listen and realized this was not the most appropriate way to fully take in this album. Don’t get me wrong, it was a great listen while driving, but when I am going to review something, I need a bit more focus on what’s going on, especially when the music is as complex as what they turned out to be. The strings were moving fast, and the makeshift percussion was keeping the quick beat, while the accordion kept a beautiful melody over the clearly early punk influences that were flowing out of this music that can most accurately be described as “controlled chaos”. Not that it was put together badly, but the changes were coming at me like a barrage of bullets, and it was hard to keep up with, and near impossible to predict what was coming next.

I decided to give it another listen when I could devote my full attention to it, and when I did, I was blown away. Not by how “great” it was, but at how intricately they seemed to construct these songs, that remember, I described as “Chaos”. Their sound can best be described as traditional bluegrass music (the stuff you’d imagine being played at a southern “Hoe Down”), played like every musician was on enough Methamphetamines to kill a horse, with vocals reminiscent of some of the lesser known NYHC vocalists. It was gritty, nasty, and yet somehow beautiful. It brought back memories of my Great Grandmother making me dance to the good ‘ole bluegrass played in Tennessee when I was a little kid, and then made me think, “if they were playing like this, then my Great Grandmother was a lot cooler than I remember.”

I’ll be honest, I was barely able to decipher the lyrics from direct listening, so I had to go look them up, as lyrics are my “thing”. There were points in songs, like “bleeding heart” where all three of the ladies playing were singing in an unusual harmony, if multiple screamers can actually create harmony, where I was able to decipher a verse or two, but it was clear that these women had something to say, and they wanted the world to hear it. After my research, I confirmed that their lyrics, much like the music, were dark and creative and well written.

Some songs were more introspective, especially the first track “Neutral Ground”. The lyrics match the dark, almost spooky melody where the singer cries out to all who will listen that we are making excuses regarding our personal struggles which we use as a reason to “check out”. Furthermore, she makes herself the listener, creating a call to action claiming “your not innocent with the ignorance your wielding/in this system of oppression there is no third party:” which I interpreted as a statement to herself, rather than to the listener. It almost comes off as an insult to all of these anarcho-punk/folk punk bands that write every song about how bad the world is, instead of writing, or inspiring, others to fix it. She really seems to both hate what she has done in the past, and vow to change the future, all while critiquing her methods, and in general, her life.

My favorite track is the title track “Sacred Objects”. It starts off much slower (but not that slow), more melodic, and as it plays now, while writing this, I can’t help but sway my head to the intro. Instead of the band’s traditional screamed vocal blend of the three members, there is a piece of spoken word, woven into the music, where the speaker trashes the current state of affairs, and describes how difficult it has become to live a decent lifestyle with rents increasing, constantly, and income staying stagnant. He goes on to speak a bit more about the youth having little to no chance of being valued like previous generations, and reiterates the consistent millennial tales of a future that is less and less achievable, then calls to action his listeners to stand up against the machine that creates lack of opportunity.

I can honestly say that this is not what I was expecting it to be when the recommendation came my way, but I was pleasantly surprised. I wouldn’t put it at the top of my list of albums for 2019, but it was well worth the couple of listens I’ve had so far, and I can imagine that they would be a great live band, with the energy emanates from each track, one can only imagine that the live show would be something worth watching.

I’m definitely going to check out their previous release, and I’ll try to make it to a show of theirs if I ever have the opportunity. Just a real fun, yet weird and dark, album, worth giving a shot, especially if you are into the folk punk or acoustic punk that is making a splash in the DIY scene these days.