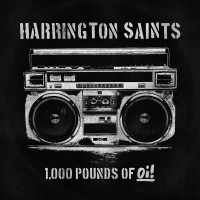 Despite my love of oi and street punk, I had somehow never heard the Bay Area’s Harrington Saints. They’ve been around for a decade already, and 1,000 Pounds of Oi! Is their third full length. I did recognize the familiar voice as soon as the needle hit the groove. Vocalist Darrel Wojick also sings in a side project called Suede Razors, a glam and pub rock band that has released a slew of great singles that I’ve enjoyed over the last couple of years. The mission of Harrington Saints is much more straightforward. As a matter of fact, the name of the record pretty much sums it up.

If you’re going to call your album 1,000 Pounds of Oi!, it better have a hell of a lot of oi on it. I’m happy to report that it does. You’ll hear classic influences like Cock Sparrer, Cockney Rejects and the Oppressed. The title track opens the record with “They called us thousand pounds of oi!/When we first hit the stage”. These are five good sized boys. They might be up to 1,100 pounds of oi by now! The majority of the record is political. “Red State” and “Fremont Train” take aim squarely at conservative America. As a matter of fact, “State of Emergency”, “Broken Windows”, “Now More Than Ever” and “Rise Up” are all calls to action. Harrington Saints are certainly more left leaning than many of their street punk peers.

“Pressure” and “Counter Attack (Bread & Roses Pt. 2)” offer more standard oi fare and talk about the struggle of the working man. The only light hearted song, other than maybe the title track, is “Rock-N-Rolla”. Not surprisingly, that’s the one that sounds most like a Suede Razors tune. If passionate, politically charged oi and street punk is your thing, you should definitely check out Harrington Saints. If you’re like me, it will be better late than never. The old school black and white boombox on the cover is pretty cool too. Besides, 1,000 Pounds of Oi!, breaks down to 100 pounds of oi per song. That really is a hell of a lot of oi!

Major League: There's Nothing Wrong With Me