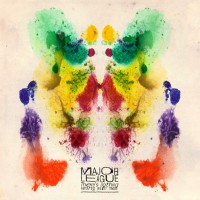 Major League are a pop-punk band from New Jersey. Having lost their lead singer before this release, the two guitarists in the band took over vocals; with Brian Joyce taking lead duties. Now, the band are back with a new, improved sound, which is showcased on new release There's Nothing Wrong With Me.

Their earlier records sounded like pure pop-punk. The really cheesy kind. They've now got a more gritty sound, and more depth. After touring with bands like I Am the Avalanche and Turnover, it sounds like those two bands in particular rubbed off on them.

There are big moments, like the stunning "Kaleidoscopes" which is pop perfection, with its utterly gigantic singalong chorus; while closer "Rittenhouse" is atmospheric and brooding, building slowly from an understated intro to a big finale.

There is also a lot of range across the record. From the heartfelt acoustic track "Montreal" where the vocals shine, to the interesting "Just As I Am" which sounds like it could fit quite easily on Balance and Composure's latest release.

On the whole, it's a solid record. There isn't too much which screams 'instant hit' apart from the aforementioned "Kaleidoscopes," but it's a good, rounded, confident release, from a band who've undergone such a big change. It's a nice fresh start at least, for a band who never really made that sort of lasting impact before.