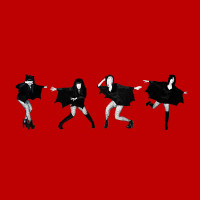 Here’s the key to the Darts- Despite all the slamming garage rock riffs, despite the spooky Munsters keyboard, despite the Shining-twins style choruses, they’re willing to let themselves be vulnerable. Case in point, “Don’t Hold My Hand” explicitly details, “don’t hold my hand / you don’t know how deep that cuts me.” It’s just a line or two, but yet, like many a-great lyrics, we know the exact picture that the band is painting even though they only need about five seconds to convey it. But even moreso, this isn’t a “boo hoo hoo is me song” and it’s not even a “fuck you” song. If anything, it’s about our protgonist and only about our protagonist, along the same great vibe as Carly Simon’s “You’re so Vain.”

And that’s the trick to the playfully titled I Like You But Not Like That. Yes, garage rock has been done before. And you know what, even spooky garage rock has been done before. But all of that is kind of set dressing. The clincher isn’t the spooky bat costumes here (even though they are fun), but it’s how the band addresses universal and even well worn topics from a unique and fresh perspective. The title track, for example, which is built off a fuzzy, buzzy guitar that could fit in either a White Stripes or Nuggets track, is earnest without any sort of vengeance or even distress, it’s a cold matter of fact slash: “I like you but not like that.” Morrissey is (or was) the king of the cold, objectively harsh face smack and the Darts are rising to that grand level of poetry. The fact that the track is tinged by an understated opening (“If we had more friends in common/ if you weren’t quite so creepy /if you were a little calmer / maybe we could have been something”) colors the tune, and the album even more.

The Darts don’t need to scream their message- they often drop a song’s core essence as an aside between new-wave-meets-Misfits keyboards and bashing drums, and that’s why this release, while rooted in ‘60s jammers, is not only more than meets the eye, but a rare form of nuance which is rarely achieved. The love of acid-garage-punk and ghoulish façade is really the book jacket to the story contained within. But, I must admit that the book jacket itself is really cool, too.