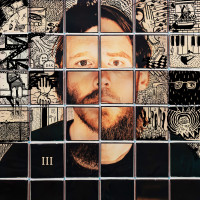 III has more in common with Bad Books’ self-titled debut. The songs find Hull and Devine switching lead vocals over mostly acoustic guitars. McDowell gives certain songs a little extra flair, but if you’re picking up III, you came for the songwriting. Hull’s batch often feels like they could have been Manchester Orchestra songs after a little more time and layered instrumentation. But they continue in the same vein as A Black Mile to the Surface, considerably stripped down. Devine continues as reliably as he’s ever been. If you’re a fan of his brand of emotive storytelling, these are going to hit. Especially “I Love You, I’m Sorry, Please Help Me, Thank You,” a song for his daughter which he refers to as “bumper sticker logic while you’re walking the plank.” Both are verbal painters and the visuals here are striking as always: “taking shots out of a spray can,” “roped at the wrist, circle chains, hers and his,” “I'm a 7 page laundry list of sinful deeds.” Don’t worry, there are plenty more gems over these ten songs.

The album jumps between the personal and political quite possibly too much. While fatherhood looms heavy over III, so does religion. III often feels like individual ideas bundled together to make ten. While Manchester Orchestra benefits from overarching themes on their albums, here looking for a through line feels pointless by the second song. But Bad Books is primarily about three friends making music together. And while it took seven years to make, Hull and Devine were in constant communication throughout the period. And recorded it together. “I Wrote It Down For You” and the nearly nine-minute closer “Army” show how great this can be.

The vibe of III is purposefully loose but these two thrive with structure. Bad Books remains a way to show Hull and Devine are just as effective with minimal backing but III could have released a series of singles for the same general effect.