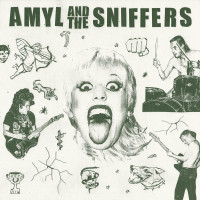 Amyl and the Sniffers

Australia’s Amyl and the Sniffers made a quick name for themselves via two routes: First, their initial blast of three EP/Singles constituted two handfuls of absolute rippers. Each track seemed catchier than the last, perhaps channeling the early fire of west coast punk rock, as ignited by the indomitable charisma of singer Amy Taylor. She was explosive, angry, and funny. Imagine, maybe, Debbie Harry’s crazier, more lighthearted cousin. Second, their wardrobe was something of a shock to us North Americans, with their stylish ‘70s sitcom meets Bon Scott’s denim look.

As to the first route- good on ‘em. But, the question is, how catchy can you get before you wear yourself out. If every song is a thumbsnapper, replay value can be surprisingly low. As to the second route- who cares. Get over it. Sure, some bands dress funny or interesting on purpose and some just do it de facto. It really isn’t all that relevant.

So, one would guess, on their debut self-titled LP, which arrived with a fair amount of expectation, the band may have felt the walls closing in. Did every song have to be snappy? Is that all people wanted from them? And if that was the case, would their lifespan prove to be disappointly short?

Perhaps seeing the future before them, Amyl and the Sniffers have taken a change of direction on their debut LP, which really, after three punk banger singles, is the time to make it. Now to be fair, the change isn’t radical. They’re still a punk band propelled by simple, smashing chords and Amy’s blunt-but-poetic lyrical howls. But, while the difference may be subtle, it’s important.

The band has ramped up their speed and attack by, say, 40%. They play faster, harsher, and even Amy, who used to switch between a song bird coo and punk scream now is in the ire chamber most of the time. Case-in-point is that two songs return from an earlier single here: “Some Mutts can’t Be Muzzled” and “Cup of Destiny.” Startlingly, those songs are in less snappy presentations here- but they are faster and wilder.

“Go Fuck Yourself” blasts by in 108 seconds with Amy screaming “I am not impressed” and “You can go fuck yourself.” It’s as fierce as anything they’ve done before. Yet, whereas many bands would make a track like this pure rage, Amy’s charisma adds a whole other element. At once, she’s pissed off, funny for her frankness, and perhaps vulnerable. Many punk bands like to be big rough and tough and angry all the time. Amy seems to be angry most of the time here, but she’s also human. “Got You” is the rare hardcore love song. None of these tracks take away from the more vicious, glaring eye tracks. In fact, because she openly displays emotions that a lot of punk tucks away, tracks like “Gaked on Anger” rip that much more. And, that’s not to mention, the cultural exchange here- with Australian slang and viewpoints dropped here and there make the album fun and just a bit alien to us non-Aussies.

Yet, while the band verges close to hardcore territory frequently, they seemed to be more focused on keeping the rock in punk rock. “Monsoon Rock” is a riff roller coaster of there ever was one and the band keeps a swing in their step, even when charging. The result is that, while these tunes might not have quite the caught-in-yer-brain stickiness of “I’m not a loser,” they’re longer lasting. Because the band is speeding so quickly, and rushing out combustible sounds, it takes more deep dives into the album to catch everything. Frankly, between Amy’s bending inflections and the band’s music that always tilts towards destruction but never quite falls, there’s a lot to take in.

Because Amy and the Sniffers got such a buzz so quickly, there was a fear that they’d be flavor of the moment and nothing more. If anything, the band seemed more scared of that than anyone else. The new record meets the threat head on by throwing off the early-praise shackles and rushing forward. Heck, Amy even says it herself on the album, “I like proving people wrong, it probably means I’ll die alone/ I like control, I’m obsessed!” It seemed the Internet was driving this band’s narrative, but with this release, they’re in control of their own story now. Where they go from here is up to them, not snarky bloggers, websites, or anyone else.