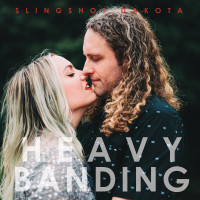 Slingshot Dakota has always been one of my favourite bands in the indie/emo genre. When I really got into music I'd say on a personal basis around 2012, Dark Hearts stood out to me at a time when I also became obsessed with Topshelf Records' roster. 2016's Break followed suit and really reinforced that candy/synth/pop also was a signature the band would wear well on its sleeve, cultivating something to appeal to the mainstream as well. Come Heavy Banding, it feels like a more mature band on a new label doing something a bit differently, and while that usually would translate into losing their sound or experimenting, SD simply improve on the foundation that was there before and chart an album which moves past kids in puppy love and into the realm of adults making that love work.

It's hard to single out tracks from this, what I honestly believe is their best array of songs to date. It feels like you're looking back at your youthful days, the exuberance captured and how in the present (and for the future) you have to tame and appropriate those flames. Songs such as "Blood Villain" -- while yeah, they're still bops and singalong -- have a more slow, burning effect to them before they get loud and angsty. Think of bands like Empire, Empire! I Was A Lonely Estate, Dowsing, Snowing, Dikembe, Annabel, Prawn, and most of all, Tigers Jaw.

Carly Commando here really waxes on like Tigers Jaw's Briana and it's a remarkable thing to hear SD bringing forth the latter's sound of old but with their own flair inside this take. You've got organs human, pianos making you want to dance and yes, bubbly guitars that really stake their claim for indie album of the year -- just soak in the "Moon" too and you can see what they were aiming for right from the start. Another comparison I was surprised to get here is Manchester Orchestra: a flushed, fuller rock sound on tracks like "Premeditated" which reminds us as much as SD is for emo-kids and college radio, they're made for dive bars and no disrespect, a more mature audience.

Ultimately, the way they get loud, aggressive and lash out is something I called for years ago, and which I'm really glad to see them bring to fruition. It's not often a duo can harness this kind of poetry in storytelling and script such a fluid musical novel, but you know what, I shouldn't be surprised SD does it. By the time songs like "People Pleaser" and "North Shore" sink you, the record will have said enough and you can tell just how strong Tom Patterson's love is for Carly and vice versa. Which kind of says it all, people in love making music to fall in love to... and with.