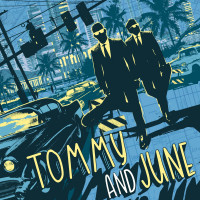 The album art pretty much sets the tone for this record. The whole thing is shrouded in mystery. As the story goes, Fat Mike assembled this unlikely duo because he knew they could write and record a kick ass album. So Tommy, a Jew from Israel, and June, a Colombian Arab, got together with Fat Mike to record 10 sweet, catchy songs (one of which, “Adulthood”, is a cover song) clocking in around 20 minutes.

Tommy, who wrote the songs, sings lead on all of the tracks. While June, who helped with all of the arrangements, sings harmony on all 10 songs. Both musicians are in bands and have toured extensively and their experience shows in both musicianship and songwriting. While not all of the songs are autobiographical, their experiences bleed through on songs like “Lonely Train”, “Jetlag Blues”, and “Ghost of Paris”. And at least three of the songs (“Adulthood”, “Better Life Story”, and “Young Man Bones”) discuss the burden of growing up while maintaining a youthful passion for living.

Many of the songs are somewhat somber in tone, partially because of the instrumentation (mostly acoustic) and abundant harmonies. But, despite this, the songs are super catchy. And while there is a clear finger picking style that runs rampant courtesy of Tommy’s definitive guitar playing, there are still songs that are reminiscent of the pair’s punk rock background. Most notably, “Ghost of Paris”, “New Alive”, and “Black Maze” display this, with a touch of new wave.

Some people may balk at the idea of this record because it doesn’t necessarily fall into Fat Wreck Chord’s canon of releases. But I like the idea of Fat Mike producing and releasing a record simply because he thinks Tommy and June are musicians that should be heard. And I agree. This album is worth the risk. Separately, they have produced some great songs. But together, they compliment each other perfectly and have made an album that may seem simple at first. But with more spins, the intricacies seep through and it’s easy to see why this record came to fruition.