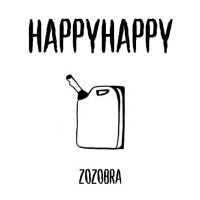 I was lucky enough to receive a copy of HappyHappy's newest album, Zozobra, in both rough cut state and final state, before its release date, and I actually enjoyed both copies. Before I dive into Zozobra, I must warn you that the album, while staying true to HappyHappy’s lyrical genius, is an entirely different take on his genre through its musicality. Rather than sticking to the toned down, acoustic guitar, he has added several other instruments, including a very welcomed horn section and beautiful violin blends. For fans of his his previous self-titled album, your first listen may come off a bit shocking. But, rest assured, there is some greatness involved. I’ll admit, it took me two to three listens before I could adjust to the changes, but once I did the full effect of the album consumed me, and it has now been on regular rotation for a few weeks.

The first track “Overreaction” is aptly titled... when I heard it, I overreacted as I was expecting the toned down, nasally perfection I had grown to love. It starts off with a chant that recurs throughout, in varying ways, and sounds like a typical pop song on the surface. The lyrics flow like a stream of consciousness and, like most of his songs, seems to be speaking to a certain listener. But with his amazing lyricism, you become that person, regardless of the lack of history that clearly exists between the writer and his actual target. “There's no such thing as an overreaction/it’s just a very strong reaction/I feel I very strongly react in almost every situation and I wish that I didn’t” sends the listener into the same state the entirety of his self-titled album did, only this time it's set to happy melodies. While the last album felt dark and sad, yet engrossed the listener in the beauty of that sadness; this track. and the following ones, show the other side of the singer, leaving a fan feeling what one can only imagine a person suffering from Bipolar disorder experiences daily. The ups, the downs, happiness, sadness, all come together to paint a picture of a remarkable man releasing his demons through song.

By far my favorite track is “Panic Attack” towards the end of the album. It recalls more of the melody and toned down nature of his previous album, while adding just the slightest bit of change through a violin that almost makes this somber ballad become uplifting, despite the lyrics defining a failed relationship. HappyHappy has no qualms with revealing any and all of his own faults, and often displays them with pride. His songs acting as a cathartic means of self-improvement, and this tune is no different. “You told me not to do this/but here I am/I got a flask in one pocket and the bottle in my hand/and I’m upset I’m angry/I’m way too mad/you were sitting under a tree when I refused to say I love you back” sums up his feelings, and opens the listeners eyes to the internal struggles he is using his music to overcome.

Overall, the album is a successful follow-up to the s/t album, which I believe was perfect in all aspects. I will admit that this album is not as great as the previous, but that’s like saying Flea isn’t as great a bass player as Les Claypool; they’re still both legends, and I have a feeling this album will go down with his last release as staples in every Folk Punk collection. Rib Fest Records continues to put out the best of the best in this genre, and I cannot wait to see what is coming next.