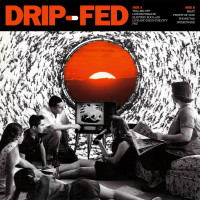 The self-titled debut album from Drip-Fed delivers fresh melodic hardcore in late 2018. It’s subtle differences in tone and delivery that distinguish this group from countless bands attempting to make this same type of music, a big differentiator for me is how they manage to bring that almost-live spirit to this recording, that raw confrontationalism Texas hardcore has never been a stranger to.

The pacing, weight, power, all display an interchange that keeps me coming back for more. This lean album plays like a pressure cooker, unrelenting in its tension and power, with the melody occasionally and expertly in control of when and where to alleviate the buildup, pluming out over top in vicious bursts that don’t allow relief as much as serve as a harbinger of still more yet pent up below the surface. This album doesn’t give you a settling-in period, from the needle drop you’re off and swerving along with the adventurous vocals, rightly at center stage. Guitars are steering these songs around creative corners you may have thought we were travelling too fast to take. Vocalist Jeffrey Blum sounds like he’s constantly on the verge of falling behind his coconspirators, and the urgency shoots straight from his throat to your chest. The chorus in the opening track, “Tell Me Off”, has a fierce hook, impressive to craft and execute at full pace, that will have your head tonguing the line ‘I tend to destroy more than create’ for days. Further down and closing out the A-side a jarring “PEZ” establishes this record as a stomper’s fertile grounds, and while the subject matter is well tread in today’s music scene, the ferocity of this track makes you believe maybe Drip-Fed are just the men to do something about it. It’s a powerful, slightly sludgy, driver that stays with you.

I pick up some influence from The Bronx’s early years, while these vocals don’t get quite as bouncy as Caughthran’s, the speedy, guttural delivery keeps momentum high through some great tracks as well as some others you would be forgiven for not differentiating from each other. Penultimate track “Phone Tag” is memorable, but maybe not in a great way, providing a repetitive chorus/outro that brings this album sonically closer to some of the newer music coming off Fat Wreck, a comparison readily made at some sharp tempo shifts earlier in the first half of the album as well.

Closer “Intertwine” is as good a melodic hardcore song as the world is making these days, and lyrically leaves your brainteeth a lot to chew over. ‘Tough luck on our side, but can’t let it break our stride’, ‘when our bodies combine, our strength will double in size’, ‘if we give a shit, then I think we’ll exist forever’, somewhere in these lines you’ve got a sequel to “Rise Above”, made pitch-perfect for an increasingly connected punk community, and while it may not be inspiring as many kitchen table stick-and-poke’s as its spiritual predecessor, it sure could inspire a lot for crowds of punk kids for years to come.