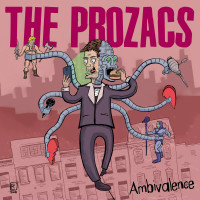 After countless EPs, Split 7”, CD releases, and compilation tracks on top of full-length releases, you have come to know what to expect from The Prozacs. They are like comfort food when you are down. Always reliable and enjoyable. On their fifth LP Ambivalence though, we are hearing some of the best song-writing by the band to date!

The album kicks off solid with the opening track “Rocking Out” blaring out of the speakers. This track has enough backing vocals and whoa’s to make even the most critical Misfits fan blush. There are plenty of bass runs throughout the track to bring out the bottom end. The second track “Outta My Face” and the fourth track “The Ripper” first appeared on 2018’s split 7” with Marko And The Bruisers. The former is a harder, more aggressive in your face track. The latter is another heavier track with stellar backing vocals which the band is known for. Sandwiched in between though is for me the standout track on Side A, “Party’s Over” Any long time punk rocker can relate to this track. This is a steadier tempo 90’s style track with Weasel-like guitar leads over the solos. The next track “Out Of Time” kicks off with more of a Celtic Punk tempo which is new territory for the Prozacs, thus further channeling the 90s on this release. The final track on Side A is “Wishing & Waiting” This is a definite summer track which is as much happy as it is poppy. This one is a definite nod to bands like the Apers or Manges.

Side B begins with “Come Out Swinging” which is another more aggressive track with phenomenal gang back up vocals. Next is “Listen, Learn & Dance” which has a brilliant chord structure and intro. This track is reminiscent of the 90’s Fat Wreck Chords sound. “Feeling So” is another straight and to the point song which is both short and sweet. The next track “Live Like It’s New” is another steady anthem-like rocker, and is the standout track of Side B. Fat Mike would declare it having “Backing vocals in all the right places!” Plenty of guitar leads as well. My only criticism would be in the placement of “Lost In the Waves” as the album’s closing track. It is a nice slower paced track that seems a bit anti-climactic after all that precedes it.

To summarize, the Prozacs have released possibly their best effort to date, building on their perfected brand of 90’s Lookout-era pop punk. They have incorporated additional familiar 90’s punk sounds and styles to craft what will most likely make most pop-punk fans’ top 10 list for 2019.

Magnitude: To Whatever Fateful End