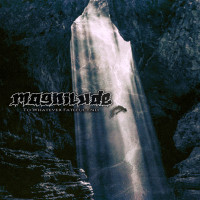 While I wasn’t familiar with the North Carolina based hardcore band Magnitude, they immediately jumped on my radar upon the release of their debut full length, To Whatever Fateful End. Early impressions of the record on social media were extremely positive so I spent some time that night to check it out. After a couple complete listens, I immediately ordered a copy on vinyl and it honestly hasn’t left my turntable since.

Album opener “Forthcoming” is a surprisingly epic instrumental intro with reverb soaked acoustic guitars that almost sound like something on an early 80’s Metallica record. A steady snare drum beat increases in intensity while the guitars continue to ramp up before jumping into “Opposition”. The tempo picks up with a chug heavy rhythm riff that is certain to elicit some two steps before getting even faster in intensity during the verses. My early impressions of the Magnitude’s sound were heavy nods to 90’s hardcore, which the band self admittedly references with bands like Strain, Trial, and Slugfest.

“Vital Emergence” features a catchy main riff with a nu-metal flavor due to the harmonics that pop up every so often. The band alternates between punky uptempo verses and exciting buildups that segue into crushing breakdowns with ease. The aforementioned formula is on great display on “Defy”, which also has the catchy pile on gang vocal lyrics of “I stand to defy” during the chug heavy breakdown.

“Counterattack” is another breakneck track with a crossover vibe, the riffs thrashier than the songs before it and a brutal double kick drum passage towards the tail end. “Resurgence” is another instrumental break in the chaos that is very sonically similar to the album opener. Clean guitars and a catchy bass line lead the way until a distorted guitar solo takes center stage amongst a simple rhythm section.

“Plea” starts with a clean chorus soaked guitar intro before devolving into another crushing riff. The vocals throughout the record are delivered as more of a yell than a scream, and are easily intelligible to longtime listeners of heavier music. The lyrical content is largely related to straightedge, as Magnitude is a straightedge hardcore band. I admittedly tend to focus on the instrumentals while listening to music, but these lyrics are catchy and I can picture the audience at live shows heavily participating in yelling them back.

Title track “To Whatever Fateful End” begins as a bass heavy slower tempo romp before picking up into a circle pit inducing riff. The drums are frenetic and tom grooves accent the rapidly changing wall of guitar, all until the track slows into a momentary break in chaos. The prelude is reminiscent of something on early Poison The Well records, but quickly jumps into a crushing end breakdown. Album closer “Lament” is an ambient piano instrumental that drones along for just over three minutes before fading out.

Overall, To Whatever Fateful End is a fantastic debut and strong entry into modern hardcore that is worth checking out. The rise of bands like Turnstile and Knocked Loose are making hardcore more accessible to fans of other genres like punk, and with the proper exposure I can see Magnitude climbing the ranks. I look forward to what else the band has coming down the pipeline in the future, the record is available now via Triple B Records.

Vampire Weekend: Father of the Bride