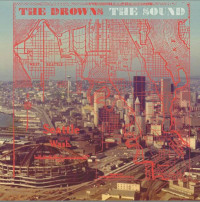 There was a lot of buzz surrounding the Seattle/Los Angeles trio The Drowns after the release of their debut LP, View from the Bottom, last year. After all, the band contains current and former members of Success, The Shell Corporation, MadCap and Time Again. Now they’ve followed it up with the two song single The Sound on Pirate’s Press Records. This is my first time hearing the band, and I must admit I’m fairly impressed. I would describe them as an unlikely mixture of maybe Hot Water Music and early Dropkick Murphys. They remind me a bit of their lablemates Territories.

Side A is the title track. It’s one of those songs that walks the fine line of sentimentality without getting sappy. It’s all about how much the music means to these friends. We’ve all felt that way, but these guys are able to put that feeling into words. The singer’s voice is about a 9 out of 10 on the raspiness scale, and that might be what keeps this from being too touchy feely. It’s also catchy as hell with gang vocals and some nice frantic sounding lead guitar work toward the end.

Side B is called “The Bricks of Ol’ Rainier”. It serves as a love letter to Seattle, and is about the search for belonging. It feels like a punked up version of an old folk song. It might remind you of an older DKM or punkier Pogues tune. The melodic guitar lines are a nice contrast to the chanted vocals in the chorus. The two songs together really paint the whole picture of The Drowns’ sound. There is a good amount of variety, but also a cohesiveness between the two tracks.

As has become typical, Pirate’s Press Records has done a nice job with the packaging. The plastic outer bag is printed with a map of Seattle, and it looks cool over top of the photo of the city on the cover. It’s also available in three color variants, none of which are boring old black. (I got the beer colored, which seems very appropriate.) If like me, you haven’t heard The Drowns, The Sound would be a good place to start. These two tracks will definitely leave you wanting to hear more.