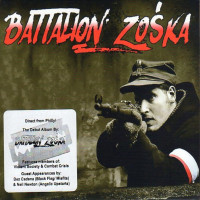 Battalion Zoska (That’s “Zoe-sh-ka”) is the new band fronted by Pat of Philly punk bastions Violent Society. While VS may have reveled in the youthful shroud of American Street punk, the BZs take a decidedly more mature and nuanced approached- but thankfully, this is one of the cases where “more mature” doesn’t mean softer or slower.

To that end, the entire self-titled album seems have been written and recorded with great consideration. Yes, there is a base of street punk here, but the band cherry picks the high points of hardcore, oi, classic punk, and even some metal here. “Sold and Bought” almost verges on the poppy jump of Buzzcocks while “Island of Lost Souls” sits in that sweet spot between grime metal and grime punk- call it Motorhead with slightly less rock and more hatred, if you will.

Such a strategy could go one of two ways. Break bits off from here and there and you could end up with another bland “punk” album. Pat’s been around the punk block a few dozen times, so he’s aware of the pitfalls many a-punk bands have fallen prey to. So, to avoid formlessness, the band focuses on core composition more than any thing else. Pretty much every song here is built off a rippin’ riff, but to their credit, they don’t start and end there. Rather, the buzzing guitars and punching drums serve as a jumping point for the songs to warp and change, while fitting into a nice 110 second frame. Why was, say, “Suspect Device” such an iconic track? Because it’s very short, but does a lot in its limited run time. The BZ crew know this secret and apply it throughout the record, giving each of the 13 tracks here identity and momentum, despite the fact that this is undeniably a P-U-N-K record.

As he details on “’80s Kid,” Pat is indeed an ‘80s kid, so his lyrics are informed by the bleak worldview of the bands of that time period. Just as the music is cherry picked here, the lyrics are too in that topics which may have been addressed in ’86 which are still current now, get their proper respect. “Arm Everyone” cracks back at the idea that teachers, or anyone else, really, should pack heat. “No More” puts most of the current –isms on blast. “Moral Coward” wags its fingers at politicians (and their like) who beat their chest but don’t walk the walk. But, despite the anger and frowning, they save a little fun at the end- “I love drinking beer/I hope you that you do too/ I love drinking beer/ because drinkin’s nothing new / early in the morning . early afternoon / early in the evening / hey ho! Let’s go drink a beer!”

There are a few things that serve punk better than a little self awareness. Battalion Zoska are fully aware of who they are and where they came from, which makes their enduring conviction that much more meaningful… especially when they pause to take the piss out of themselves here and there.