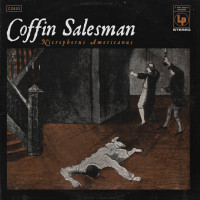 Coffin Salesman is the project of Bostonian, Aria Rad, who recruited one wicked gang of friends to record Nicrophorus Americanus under moniker Coffin Salesman. This is Americana, seething Folk Punk with a full lambast of diverse instrumentation that marks the best genre releases. Coffin Salesman gets in your face with organ, piano, fiddle, violin, and a whole bunch of guitars. This album is forged from great songwriting that isn’t limited to the instrumentation, with inspired and expertly disciplined lyrics and decently disciplined delivery, where word choice and cadence work as hard as the string arrangements in world-building. As opposed to what can sometimes be the case with some folk punk boasting so many eclectic sounds, the musicianship really does serve the songs and album as a whole, there’s no air of gimmick here. In certain bands’ hands, these instruments act as photo props or day-dreaming fantasy fulfillment, but here these are tools needed to tell this story, or at least to tell it in this literary setting. You’re not a lumberjack just because you carry a saw and wear some flannel, you’re a lumberjack when you’ve felled some timber, and this album smells like sawdust. Ambition threads each track together, the sights were set high for Nicrophorus Americanus, and it’s all very nearly realized.

If there’s a criticism to be had here, the album is a bit frontloaded, by time you flip to the B side you’ve already heard the best Coffin Salesman has to offer here. And for my ears, there’s certainly some filler. The punk edge is nearly all gone by time you get to the slower ending tracks of the album, and Aria’s vocals suffer when they start to sound like Bob Dylan on these closers, but the exhaustion emoted at this tail end is impactful, not meandering. This album still ranks as a folk punk standout for me because the A-Side tracks that work hit like a freight train, and B-side lead-off hitter “New Age Swinger” is pretty damn fun. The tone-setting “The Watchmaker”, which makes more than a few promises Coffin Salesman is well prepared to deliver on, flows nicely into the showstopping “Drowning in the Wishing Well”, which sets the standard for what Folk Punk can aspire to in 2019 and beyond. The songwriting stands all on its own in the stripped down “Funeral”, broadcasting the power of an angry young man with a guitar and sharp enough throat, and for those looking for a cause to rally behind, a calling card to get their dirty, calloused fist high in the air, we can all plan to meet the engineer on the righteous “Bloody Knuckles”. Altogether with the album artwork and searing A-side, this album makes a pretty great package, and an even better start to a cold evening indoors at home, or out with friends and compatriots around a burning fire.