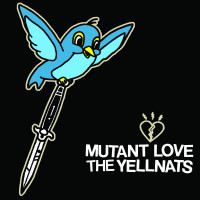 This split is like that cheap, cold, and coveted beer you want to come home to on a Friday right smack in the middle of summer. This Split between Texas' Mutant Love and Denver's (by way of Scranton, PA) the Yellnats is a fun, straightforward summer pop punk cassette. I think this split could be a prime example of something you put on in the background of a August cook out that everyone in attendance would enjoy, even the grumpy drunk guy in the hawaian shirt skeezing everyone away from the pop up kiddie pool someone set up.
Mutant Love devoted 3 songs to this split. The first being "Diane". This song didn't grab me at first but on repeat listens I like its vibe, its fun and I feel like these dudes don't give a shit if I like the song or not because they're enjoying themselves. "Over it" is the second song from Mutant Love. Definitely my favorite from ML. The guitar leads are weird but in a good way, catchy and simple seeming. "This is what it is, had enough of what it was" is a repeated anthem throughout the song (and much of every rock and roll song released in the last 40 years) but still shines each time and GOD DAMN did it hit the mark with me this week. Just because its been said before doesn't mean it can't be said and still kick ass. "Ollie Ollie OxyContin" is the third song from ML. This song is a little less straight forward the previous 2 but still a fun listen. What I appreciated about this song the most was some of the oneliners you catch "The librarian is screaming in whispers", "environmentalist don't ever sniff the roses....", "the dhali lama is in pajamas with a telescope, the pharmacist is to depressed, he won't write the script", "just because I don't find the cure for cancer doesn't mean I don't care, I just sit in this airport bar, not going anywhere". Well said dude, well said. If you like Dillinger 4, face to face, or gainesville fest in general you'd like this band
The Yellnats have 2 songs on this comp. Their first song "young punks" is energetic and full of WOAHS. I remember thinking, "dammmmmnnnn this sounds like Against Me's 'reinventing axel rose' but with tuned guitars, a well maintained drum kit, and less studded belts". This song has straight forward punk parts with some surprise turns with group vocal half time closers I appreciated.  "Small Town" was my favorite from the yellnats. Introspective and they do a whole lot with the 3 or 4 chords this song is comprised of. Its nostalgic and relatable which is what I love about punk music in general. I think anyone that grew up in a crap town in anywhere USA would appreciate this song. I have a feeling this isn't the last we'll hear from these guys and I can't wait for more.