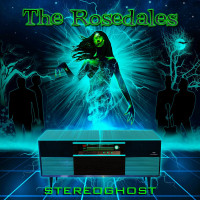 The Rosedales return after a ten year long absence, a very long time for any band to be silent from the music scene,but like great horror characters they keep on living, you can't keep a good spirit down, especially if you have had a tank-full on All Hallows Eve burning the candle at both ends. The question is has time been kind to these ghouls? The answer is yes. The Rosedales merge horror punk, Beach Boys-style vocals, and 50s Rock 'N' Roll... what a wonderful combination. However with the material on their latest effort Stereoghost you have to be a little more open-minded about the content delivered here. The music, in parts, is the heaviest they have ever done- gone are the Rockabilly influences, lots of acoustic guitar parts and violins, but the vocals haven't aged one bit.

“Stars Are Falling” is the first proper song, track two after the haunting instrumental intro, and sounds very grand, especially the music to the chorus, I can imagine any dead King or Queen rising upon their throne appreciating this. I don't really know why, it's just got that vibe I suppose... a good mid-paced rocker. Up next the first single “Crush” which underwhelmed me when I originally heard it. I didn't know really what I wanted after all this time of waiting for something new but unfortunately it didn't quite cut the mustard for me. However it does now and I really like it, heavy chunk guitars spill through the verses with a pop chorus, a song yearning for a Gothic girlfriend or maybe a living dead doll? “My Twilight “ is up next and hits in all the right places. Like being smacked in the mouth by a bag of skulls, this one penetrates your brain like a vampire's fang, dripping in blood and dancing like a maniac to its urgent riffage, a winning track in my book. Moving on to “Laguna Negra” and what a wonderful piece of work this is- a deadly romantic, moving piece with an intro that wouldn't sound out of place on The Damned's Strawberries album. It's one of the finer moments of the record which is neighboured back to back with another ballad “Fallen.”

As the album continues we are treated to more of a mix of rockers and lullabies. “Nightmare Dreams” is fast and in your face, an earworm of sorts as is “Don't Be Afraid,” another barnstormer of horror .On “The Reason I Have Wings” the vocals sound different, maybe another band member or maybe not? As the vocalist has a diverse range and is an incredible singer anyway, it's a great song and again a bit different for the band . The record's close entitled “Goodnight” is an interesting one because halfway through the band morph into the undead version of Metallica during the Kill Em All years, a bold move, nothing like what you've heard before from these fiends. In times like these it seems rare to find a band doing something just a little bit different and isn't that what punk was all about in the first place? Nobody sounded the same and that's what I enjoy about these gems that you rarely find, The Rosedales stand on a ground of their own, keeping new and fresh ideas at the forefront, and they haven't strayed too far away with this release but stretched a good way to keep things interesting again. So to sum it all up it's an album worth your time on giving a spin, full of fun and darkness. Light some candles, goth girlfriend by your side, popcorn out and Stereoghost on.