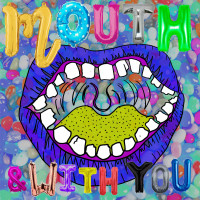 It isn’t a huge jump to suggest that anyone who likes the band Jabber and their brand of pop punk will probably enjoy Portland, ME’s Crunchcoat. Crunchcoat is fronted by Danny Bailey, who is also Jabber’s sole member based on the east coast, and the band’s first full-length Obsolete could be mistaken for a Jabber record.

The two songs on the digital-only release Mouth b/w With You represent a step forward for Crunchcoat and a step into their own identity as a band. Originally recorded for a split record, the band went for a digital release when the other band broke up.

The sound is heavier and more full-bodied. Most notably, the bass has been brought up in the mix and given some distorted teeth and its impact is significant, especially on “Mouth”. In “Mouth” the sunshine of Obsolete has hidden itself behind the clouds and a surprising level of menace infiltrates the music. Bailey draws on all the creepiness that repetition brings, asking “What’s in your mouth?” again and again over that snarling bass and a drum beat that sounds like it’s stalking its prey. A skittery guitar riff over the top compliments the unsettling groove until about two-thirds into the song. Then something weird happens when the guitar goes for a solo, and whether it’s intentional or not, it sounds like the beat goes for a smoke break and each instrument starts going in its own direction. The band pulls it back together but the rest of the song is on shaky ground in terms of cohesion.

Fortunately, everything gets right back on track for the B side track “With You”. The bass is still crunchy and high in the mix but that only adds to the Lookout Records bouncing pop punk vibe that will appeal to fans of The Unlovables, The Queers, or Upset. “With You” finds a good middle ground between the sonic big-swing of “Mouth” and Obsolete. And therein lies the story of this release: it’s a big step forward, but I’m not totally sure that step lands on the most solid ground. Crunchcoat has a solid base in a fun, reliable brand of punk rock that will allow them to keep testing their limits and pushing their sound.