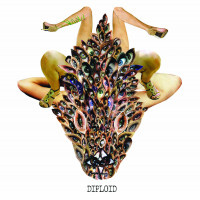 This album is absolute devastation, the soundtrack to walking through a recently demolished city as the fires continue to burn and the buildings still crumble. Diploid is a three piece from Melbourne, Australia and on Is God Up There? they combine hardcore, grind, black and death metal, and even tape samples in exciting ways. There’s a pretty even split between female and male vocals, both equally unrelenting. This is arguably the band's second full length release, but they rarely follow traditional album format so making such distinctions is sort of moot. Full length or E.P. length, each release plays like simply the next project, taking however long it needs to take to get the point across. Which is usually not very long.

It’s easy for some to be cynical about music this extreme before they really give it a chance (often this reviewer included). Even the most open-minded listener can become numb to this kind of sonic assault in the matter of a few minutes. But Diploid wisely keep it brief, achieving catharsis in far less than a half hour if you don’t count the title track (more on that later). There’s also a surprising amount of texture to be found here. The wall of shrieks, growls, sawing guitars, and blast-beat drums exemplified by the awesomely-named opening number “Doomed from the Start” is often perforated by moodier musical passages that almost veer into ambient territory, like the panicked breathing that introduces “I No Longer Remember Your Face.” It will probably take a lyric sheet to fully grasp what all of the anger and anguish is about, but the song titles and spoken samples serve as useful guideposts and the music is effective either way.

Then there’s that title track. There’s no music to be heard on “Is God Up There?” It’s just a lightly edited (or deteriorated) forty-five-minute recording of the final sermon before the infamous Jonestown mass suicide. The whole speech is haunting, and in this context seems to punctuate the album’s cry for relief from existential suffering. That’s not an endorsement of Jim Jones or his methods, and I doubt if the band intended it that way. Still, the track is worth the listen. I personally chose to skip it on repeat listens.

If you’re a punk rock old-timer, Is God Up There? might sound to your ears the way Black Flag’s Damaged sounded to your parents all those years ago. But if you were a fan of The Misfits’ Earth A.D./Wolf’s Blood or Napalm Death’s Scum, it just might be right up your alley. Sticklers for technique and melody need not apply.

Dashboard Confessional: A Mark, A Mission, A Brand, A Scar (Now Is Then Is Now)