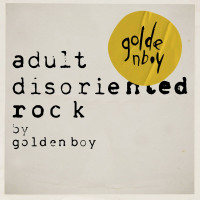 20 years ago, goldenboy came to the U.S. from its native Bergen, Norway to tour, brought out in part by a dedicated fan significantly involved in arranging the whole exercise. Today, that fan is well-known venture capitalist (!) and goldenboy has released Adult Disoriented Rock, an EP of pop punk consumed by the past.

Lest you think this is a putdown, goldeboy is pretty up front about its intentions. Setting the liner notes aside, EP opener and de facto statement of purpose “Old and Boring” lays out what will be the defining characteristic of the release; winsome reflections on the past. “Fast forward / 41 / still remember how much fun / big applause in Little Rock / Stillwater and Stohli shock,” sings guitarist / vocalist Torkel Hofslett Thowsen, right before reflecting on missing California. The track soars on its melodic bass and backing vocal harmonies until, in a nice piece of thematic and musical symmetry, the song fades out right as it’s about to crest.

Midway through “Faded Photographs,” the second song on the album, Thowsen says he’s “never going back down memory lane.” It’s the only outright lie on the release. While all the songs aren’t as focused on opportunities of the past, the through-line here is nostalgia in the face of aging. “Faded Photographs” looks back on a failed relationship; “The Letter” reflects on a friend’s long-running hurt and what might have been done to prevent it; “Good Boy” and “Phonebox 84” are, broadly speaking, about getting old while remembering the past (“Years come / Years fade / Circles never end” from “Good Boy” might as well be the EP’s motto).

What makes all this reflection work is its positioning. Goldenboy would be well within its rights to be bitter, but the tone of the music is one of a friendly reflection with a respected elder. It never talks down to the listener, never has anything negative to say outside of its own self-criticism. It’s aided by the song composition, which is air-tight and note-perfect to a specific early 2000s punk rock style. The production and construction on Adult Disoriented Rock recalls the halcyon days of Fat Wreck in the “Rock Against Bush” era, with all its vocal harmonies and bass-emphasized melodies and “whoas” and so forth. Want to trick someone into thinking you’ve uncovered some No Use for a Name b-sides? “Good Boy” or “Goldenbox 84” will do the trick, at least until the violin flourish kicks in on the latter.

Diploid: Is God Up There?