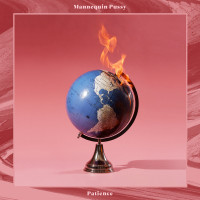 If you're a band that's cut its teeth on Tiny Engines, expect big things on the horizon, especially if you've got solid albums like Mannequin Pussy had recently with them. Now, this isn't to knock Epitaph on signing such talent, or to detract from the band's consistently amazing ability to put magic and art out, but damn if I don't once more shout out records like Romantic and Gypsy Pervert and how TE took a chance to bring them to us. Those were the building blocks for Mannequin Pussy and it's safe to say with this new album, they won't be an indie darling anymore. They're gonna be touted more as (something I already envisioned them as years ago on my end-of-year lists) a punk powerhouse.

Being back by Epi would surely help, but Jesus, Patience merits every fucking accolade in the book. Calling it an album with a message is an understatement, and shout out to the band for donating sales to the Trevor Project and Epi for matching them. That's the power and belief in these philosophies you'll hear on the record -- ones that wax on about life, love, recovery, heartache, trauma and mental health in general. Whether it's power-pop jams like the self-titled opener or the trauma of the slow burning, haunting "High Horse," there's a clear picture painted -- in fact, it's a whole novel -- on the bruises (emotionally and physically) scarring us for life.

Marisa Dabice's vocals are once more a delight -- powerful, earnest, honest and carrying -- which is perfectly complemented by producer Will Yip. I thought he'd drown them out and nullify their indie sound, but he doesn't and even in the few occasions it does happen, Yip works it for the best. That's because MP clearly carve their most expansive sound to date and it's a remarkable feat, as per the fuller, flush take on "Drunk II" -- something grungy a la Hole. This track in particular highlights how diverse the band is, with some alt. 90s rock strewn in for good measure. Heck, when you see how they distil Cranberries into jams like "Fear/ /Desire" you can tell they definitely wanted to make sure they evolved their indie essence and well, Yip proved to be the perfect person to help them achieve this. Even on the closer, a bright, bubbly and overly optimistic "In Love Again," it feels like a ballad that deserved to be polished up as opposed to a rough, grainy aesthetic -- just because it's a diamond with lyrics that tear at your very soul.

I love how this album feels like the culmination of the older ones, as if they were building to this loud scream. I mean, when you listen to the War on Women vibe on songs like "Clams", it makes perfect sense, not to mention there are a few other nuggets with the same abrasive punk style you definitely want to mosh to. It feels like the band'll have a lot more energy and anger being let out in their live shows too, which probably reflects the lyrics that fight against toxicity in the world, both people and places. In that sense, MP found a great fit and an ideal outlet in Yip and when it comes to disconnecting from the way women especially are objectified, you'll find a lot of morals in the story being told here. After all, it's their longest record to date and why not -- when you've got so much to say and you can make music that resonates deeply like this, well, MP's on track to hit it home the way Menzingers, Joyce Manor and so many other Epi bands do -- smacked and out the park.