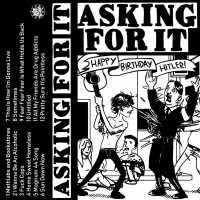 How do you write a review for an album that is regarded as one the greatest of its genre by near every member of that scene? I’m not exactly sure, but I’m going to do my best to do so.

Chris Burrows, the songwriting force behind Asking For It, This is a Robbery, and The Anorexic Olsen Twin was a major “star” in the myspace days. He was right next to Pat “the Bunny” Schneeweis, a.k.a. Johnny Hobo, a.k.a Ramshackle Glory, a.k.a. half of Michael Jordan Touchdown Pass a.k.a. The Godfather of Folk Punk (and I’m probably missing about 8 other a.k.a.’s) during those glorious days when the internet was blowing artists up in seconds due to posts on Myspace, and changing the way music would created/distributed/listened for years to come. During those early days, Chris, a native of Tasmania, released the iconic album Happy Birthday Hitler. For quite some time it was nearly impossible to obtain a physical copy, but Ribfest Records, being the geniuses that they are, rereleased the album on cassette tape, giving this punker the chance to finally hear a good copy of it (before I’d only heard it on youtube), and actually review the album that some might say started several of the current leaders in the genre on their path to making this music that has captivated so many.

The album is fairly simple, and not as overdone as some of the newer musicians in the genre, but in its simplicity, the acoustic melodies bring life to a lyricist that is nearly unrivaled. And his voice! There are few that can compare to his particular type of growl. Like the best singers, you know who is playing when you hear his voice, even if you’ve never heard the song. Though he might argue that these are some of his lesser writings, the implications that followed them are unparalleled (save for maybe some of the early Johnny Hobo recordings).

Chris has admitted that some of the lyrics had the world view of an 18 year old from “bum fuck nowhere”, which makes sense since they were written 10 to 13 years ago, and he is from Hobart, Tasmania, Australia. Ever heard of it? But hidden within that early mind were gems of perfection that resonate to this day with the anarcho-folk punks who can’t wait for 2020 when he plans to make the trip across the pond.

He starts the album off with the aptly titled “Methlabs and Bookstores”, chronicling his choices for a life that was bestowed upon him without his having a choice. “Maybe I’ll start a Meth Lab, my friends make a lot selling drugs” or “Maybe I’ll start a bookstore, then again dont know shit about books” start the two verses, but the brilliance of his lyrics shine with the finale of his second verse. “and if anybody should /Ask me what I'm doing tonight /tell them I died yesterday /Cause life's a joke/and I don't get it “ At 17, 18, or even 19, nobody gets life, but what’s more brilliant is that most “adults” don’t get it either. We travel a path trying to figure it out, and at such a young age, Chris had already figured out that there is nothing to figure out. Which is exactly why he follows the opener with “I wanna be an alcoholic”. At this stage, knowing that nothing really matters, why not just “drink until the day [you] die”.

Not to digress, but one would expect a view like this to fade after a little more than a decade, but Chris stands by these words today with his more recent releases, and the way he gifted them to the world at such a young age was prophetic of what most millenials and Gen Z’s are feeling these days.

The album continues with the simple, but effective, title “Fuck Cops”. While Chris admits there is a line or two in the song that he regrets writing, the basis for the song is still a common theme amongst his more modern writings. In this world we’re living in, where there are cops shooting civilians on way to regular of a basis, this song resonates despite being written so long ago. And it's not just the shootings that he’s against, it's the sense of entitlement of the ones that are meant to protect us, that instead, in many cases, oppress the underprivileged. “I hate cops /And if to serve the badge it means to be /A fucking asshole /Then I guess they're doing great /Why cant I have a gun!?” ends the first verse, and sets the tone for the rest of the album.

The album continues with acoustic rager after acoustic banger and takes the listener on a trip through the anger of the youthful generation, emitting the same anger, rage, hate, and regret that artists like Black Flag poured out to the world during their time of speaking out against the same oppression that Chris was still feeling 30 years later. Near the end of the album, before the most youthful “party” songs end the album, “Fear Fear Fear is what holds us back” wraps up the theme of the album, in a short minute forty six, in that we should do what we want, when we want, how we want, but the fear is what holds us back. My favorite line of the entire album is this songs chorus: “Bound by all that I know /My little ideals and goals /The world is mine to hold /Fear is what holds us back” Perfect advice for every youth to hear when entering this “adult” world that seems to be deteriorating on a daily basis.

For those not in the folk punk scene, this album may come off as immature, or basic, but what is so beautiful about the album is what it started, and the beauty that came next, both from other bands, and from Chris’s later projects.. Because of this album, and a few like it, we are blessed to have bands like Days N Daze, Apes of the State, Harley Poe, and so many others. If Pat the Bunny is the folk punk Ramones (American based first wave), then Asking for It are The Clash, The Sex Pistols, and The Damned all rolled into one.