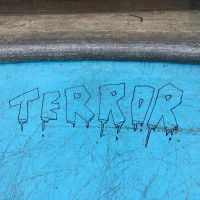 Part-time pop-punk, sometimes synth-punk, full-time storytellers, cranking out album after album over a decade as a band, Wonk Unit make some decisive tweaks to their sound here on their sixth full-length album. This isn’t a landmark album, or anything really reaching greatness, but it’s certainly one I keep coming back to. Terror is the kind of all-purpose nothing-exceptional record that often gets overlooked but carries a lot more mileage over other critically acclaimed albums of the genre.

Wonk Unit delivers here on Terror, a poppy, fun, catchy-as-hell collection of tunes that swerve back and forth between light, spastic fooling-around fare on tracks like “Day Job Wanker” and “Flummoxed More than Jealous” to some pretty serious themes and subjects elsewhere on “Ride it Out”, “Hope”, and “She Knows It”. The most straight-forward punk compositions on this album are the aforementioned “She Knows It”, and my favorite track of the record, “As the Rest of the World Sleeps”. There’s a lot of music on this album, and within the track listing you’ll find varying gradients of punk, electro, pop, boredom, exaltation, dismay, and good old-fashioned anger. It’s a ‘box-of-chocolates’ approach that means there’s a flavor just right for any of you, but not enough to make a meal of it.

If the current state of pop-punk is millennial despair, this is definitely an elder approach, tackling fatherhood, addiction, relationships come and gone, and those on their way to the same fate. While there are albums out there celebrating the trials and tribulations of road life and the punk rock lifestyle, these guys are showing the scars to say it’s not all a celebration, and the bills eventually come due. This album is sometimes too saccharine sweet, too poppy on the melody, but given the subject matter throughout the record, we should probably be grateful they dressed the entree up this way. It’s a very springy, appreciative record from some brit punks long in the tooth with a lot to appreciate. Several songs heavily utilize keys and guitar effects, but in a way that’s closer to Electric Six than Jay Reatard. The excellent single “Christmas in a Crack House” and its album closing reprise “Me and Curtis” definitely stand out as the tracks you remember this album for, as they’re most emblematic of the pairing of sonic springfull pop laid over truly upsetting circumstance and substance. Terror is the type of story that you’re only laughing at because it’s being told like a joke.

Asking For It: Happy Birthday Hitler

The Menzingers: No Penance/Cemetery Gardens [7-inch]