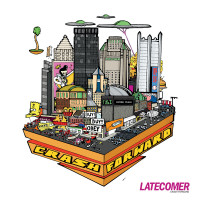 Latecomer is a bit hard to pin down on Crash Forward, in that the band doesn’t really stick with one specific sound throughout the release. It’s not as though they are experimenting with wildly varying genres, instead just sounding a little different for every song. In this way, it almost seems like the album is a collection of EPs or singles, as it lacks the cohesiveness that would be necessary to make this feel like one full album.

The group, for the most part, can be summed up by a song like “Elvis.” It’s a solid, uptempo punk anthem held together by steady drumbeat, driving guitars, and a catchy chorus that’s waiting to be screamed back at every Latecomer show from now on. Catchier pop-punk tracks like “Ketamine” and “Bummin’ Me Out” have a healthy dose of ‘whoa-ohs’ and evoke a strong Bouncing Souls vibe. About half of the songs on this record stick to this sound, a Lookout!-inspired brand of pop punk. And it seems to be where Latecomer feels the most comfortable sonically, even if that vibe surrounds a couple of lesser songs on the album.

But again, the genres twist and turn throughout the record, with “Baseball” taking a dip into hardcore, and “Side Iron Blues” having, well, bluesy and southern rock influences. The standout song comes in the form of the title track “Crash Forward” and sounds like it could have been written during the sessions for Elway’s Leavetaking. A positive beat, both electric and acoustic guitars, and a swinging anthemic chorus make for a good song, but it really comes out of nowhere sonically.

Taken track by track, Crash Forward is a solid little punk rock record, turning in 10 songs in just over a half hour of listening time. However, it sounds like the group is, at times, trying too much all at once. So even though the strong songs outnumber the weaker ones, there remains a lack of continuity that hurts the overall listen.

Green River: Dry As A Bone