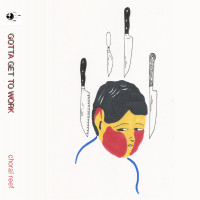 For all the power-pop-by-way-of-Weezer 90s revivalism of the last half-decade, there aren’t as many bands reaching for the nervy slacker lane that groups like Pavement and Beck owned during the first Clinton administration. One theory is that it’s hard to look that laid back; for all the couldn’t-care-less ironic posing of those bands’ best work, real discipline and chops go into making albums like Crooked Rain, Crooked Rain and Mellow Gold. No number of sour notes or lost beats can betray the craftsmanship in something like “Fillmore Jive” or “Soul Suckin’ Jerk.”

By that measure, if Choral Reef’s debut EP was just a welcome entry into the Stephen Malkmus extended universe, it’d be a success. Instead, gotta get to work takes that angular, purposefully cast-off musical style and pairs it with an emo-indebted lyrical philosophy and creates an exciting path forward for the next generation of lazy rockers who are, in fact, trying very hard.

Divorced from context, you’ be forgiven for reading words like “I’m trying to switch myself into the conscious type / but they don’t teach you that kind of shit in high school,” and thinking they’re being screamed over twinkling, finger-tapping guitar. On “done fishing,” they’re flatly mumbled, wrapped in languid, country-touched guitar and delivered with all the passion of filing a tax return.

That matter-of-fact delivery is a constant and an essential part of the EP’s appeal. It’s clear at every turn that it’s music about transition and growing maturity (“Don’t wake me up now / I’m not ready for that” on “gotta get to work,” “I’ve always known that sugar makes me sick / so why would I want to eat something sweet as sin” on “eatin good”), but those rocky waters are treated like an eventuality, not a crisis. On gotta get to work, growing up is hard, but it’s something we get through together.

For all its lyrical uncertainty, the EP’s music is confident and fun. Beyond sounding like note-perfect recreations of would-be Pavement songs, gotta get to work’s ’s highs are found in the little moments and odd choices that bring color to its arrangments; the subtle bongos on “done fishing,” the driving, guitar hero solo on the back quarter of “simulation,” the galloping on “comin home,” the way country bumpkinism to stabbing, yearning guitars on the climax of “gotta get to work.” Then there is “eatin good,” a funk-touched singalong that’s a few handclaps and one high-gloss production makeover away from being a top 40 alternative hit.

All of this adds up to an EP of smart, considered choices, executed flawlessly, presented as if it was all no big deal at all. If punk’s great leveling told generations of kids that anyone could be rock stars with three chords and the truth, Choral Reef takes up the mantel for the lineage of sarcasm-rock pioneers who know only the very bored and very talented will inherit the earth.

Green River: Dry As A Bone